Hundreds of miles from the nation’s capital, local sheriffs are feeling reverberations from Congress’ fight over Department of Homeland Security funding. 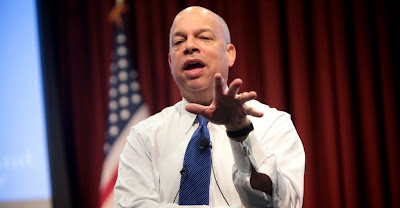 This week, Secretary Jeh Johnson delivered what one sheriff views as a “not-so veiled threat” on what could happen if an agreement isn’t reached. Johnson’s statement, released Tuesday, explains why Congress needs to pass a bill funding the federal agency before Feb. 27.

But a sheriff in Colorado is pushing back against Johnson’s message.

In the statement, Johnson called for a Homeland Security funding bill “unburdened by politically charged amendments that attempt to defund our executive actions on immigration reform.” He reiterates President Obama’s threat to veto any legislation the attempts to block his immigration policies.

“It’s a not-so-veiled threat that if [lawmakers] don’t do what the president wants, law enforcement agencies are going to get the short end of the stick,” said Sheriff Justin Smith of Larimer County, Colo.

The GOP-controlled House passed a bill last month funding the agency and rolling back the president’s executive actions. Republicans in the Senate are working to advance the legislation, but Democrats have blocked debate three times this week. Democrats want a “clean” bill; Republicans argue they should at least debate the measure on the Senate floor.

“It’s a not-so-veiled threat that if [lawmakers] don’t do what the president wants, law enforcement agencies are going to get the short end of the stick,” Larimer County Sheriff Justin Smith said.

Johnson’s statement was posted on the Department of Homeland Security’s website Tuesday, but was also disseminated to county sheriffs in Colorado through a state sheriffs association.

Chris Johnson, executive director of the County Sheriff’s of Colorado, told The Daily Signal his association frequently receives information from the federal government, including Immigration and Customs Enforcement and the Department of Homeland Security.

This particular release was passed on to him from one of the state’s government offices, and he felt it would be of particular interest to Colorado’s sheriffs.

Smith received the memo through the association and responded to Johnson’s statement on his Facebook page.

In an interview with The Daily Signal, Smith said he believes the federal government is trying to “pull the [police] chiefs and sheriffs” in the middle of a conflict that’s solely between Congress and the White House.

Johnson warned that law enforcement agencies nationwide would feel the squeeze if Congress fails to pass a bill that keeps the agency operating beyond the Feb. 27 deadline.

The Homeland Security secretary said items that could be casualties of the funding fight include salaries for state and local emergency managers, upgraded oxygen masks and tanks for firefighters in Denver and firefighter jobs in Detroit.

During his four years as the top law enforcement official of Larimer County, which includes Fort Collins and Loveland, Smith said he’s been wary of accepting federal grants because of the dependence on government doing so creates. But he called Johnson’s message an “act of desperation” from the executive branch.

“If you want to talk about immigration reform, certainly there is a time to do it,” Smith said. “But threatening vetoes with the threat of federal programs going away is not the responsible way to do it.”

The Larimer County sheriff visited the southern border this summer during a period that saw thousands of unaccompanied minors crossed into the United States. After speaking with sheriffs in border states and viewing the situation firsthand, Smith said his fear is that the president’s immigration policies will make “every county a border county.”

That fear is one shared by another law enforcement official whose jurisdiction is more than 1,000 miles away.

Charles Jenkins, the sheriff in Frederick County, Md., told The Daily Signal he, too, believes the president’s immigration policies transform every city into a border city.

Jenkins visited McAllen, Texas, with the group Federation for American Immigration Reform this summer. While cities like Frederick don’t yet mimic border cities, he believes that will change.

“I don’t think there needs to be immigration reform such as we’ve heard about it,” he said. “It comes down to we have sufficient laws on the books. The biggest piece is border security.”

Jenkins said he was unaware of Johnson’s statement on the current funding debate, but said he occasionally meets with agents from Immigration and Customs Enforcement field offices to discuss his concerns about immigration policies.

Though the agents are often receptive to his worries, Jenkins said those higher up in the department are accepting marching orders from the president.

“I think there’s a level of frustration,” Jenkins said.

This all points to a larger trend and problem: apportionment of resources between the federal government and the states. Local and state law enforcement run by locals with no input from Washington is seen as a threat to the progress of centralization and the administrative state. Look for the Evil Ones to manufacture controversy after controversy in attempt after attempt to find issues where they can override the primacy of locality. They want a nationalized police force and they will use every trick in the book to get it. The most dangerous of these centralizers are the Republican ones because the opposition to them is not reflexive. Bush and HSA/TSA is a great example. Security at local airports should have been a local problem. One act of terrorism is an act of workplace violence if it does not serve the purpose of the formation of a despotism.