$10,000 Muhammad Art and Cartoon Contest to be Held at Site of ‘Stand With the Prophet’ Conference

Author Pamela Geller, a relentless warrior for the First Amendment, makes the rather compelling argument that "if the Western media [had run] the Danish cartoons back when this Islamic supremacist movement first started gaining steam, the editorial staff of Charlie Hebdo would be alive today."

She has a point. 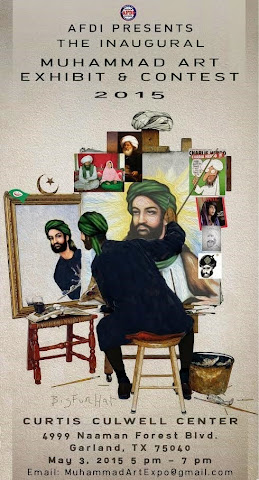 Pamela Geller is planning a “Draw the Prophet” event in Garland, Texas in the same location as a Muslim group held a “Stand with the Prophet” conference in January. The First Annual Muhammad Art Exhibit and Contest will be hosted by the Curtis Caldwell Center, which is owned and operated by the Garland Independent School District.

Geller’s event comes on the wake of the Islamic terrorist attack on the French magazine Charlie Hebdo in January. Following the attack, the Council on American-Islamic Relations (CAIR) scheduled the “Stand with the Prophet” conference at the public school district’s conference center. Geller, the President of the American Freedom Defense Initiative (AFDI), scheduled a protest outside the event that was attended by approximately 2,000 people.

During the Free Speech Rally in Garland, Geller spoke with Breitbart Texas about her reaction to the large and loud crowd of protesters. She said that Muslims are trying to impose restrictions on free speech like they are doing in Paris. “Thousands of Americans said ‘no way!’”

“The media can smear us and the President can stand with them,” Geller said. “We the people are not having it. If there is any proof of that, it’s today. We dwarfed them.”

...“Enough is enough,” she explained. “They’re just cartoons. We’re holding this exhibit and cartoon contest to show how insane the world has become — with people in the free world tiptoeing in terror around supremacist thugs who actually commit murder over cartoons. If we can’t stand up for the freedom of speech, we will lose it — and with it, free society.”

The art exhibit and contest will be held at the Curtis Culwell Center in Garland on May 3rd... The contest will take submissions online and the winner will be announced at the event in Garland. The winning cartoonist will receive a $10,000 prize...

...An author and activist with passionate fans and detractors, Geller has been sounding the alarm about Muslim encroachment into Europe and America and the possible impact on American culture in the future. The Free Speech Rally Geller organized is one of many activities she has created to shine the light on radical Islam and the teachings of Imam’s in mosques in the United States... Geller is also listed as an “Extremist” on the left-wing Southern Poverty Law Center’s (SPLC) website. The SPLC says she is the “anti-Muslim movement’s most visible and flamboyant figurehead. She’s relentlessly shrill and coarse in her broad-based denunciations of Islam.” The organization also lists AFDI as an anti-Muslim hate group.

Ironically, the SPLC may have been an inspiration for the killer of three Muslim students, who was reported to have been a radical left atheist, in North Carolina.

at 9:27 PM
Email ThisBlogThis!Share to TwitterShare to FacebookShare to Pinterest

Let's hope that about 2,000 ARMED Patriot Guard Riders hold a "training event" in the Garland neighborhood, in conjunction with this event.