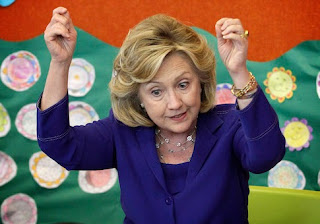 The Wall Street Journal reported this past week that the Bill, Hillary, and Chelsea Clinton Foundation has quietly dropped its ban on foreign contributions and is accepting donations from the governments of “the United Arab Emirates, Saudi Arabia, Oman, Australia, Germany, and a Canadian government agency promoting the Keystone XL pipeline.” The Journal’s conclusion: Since 2001 “the foundation has raised at least $48 million from overseas governments.”

Needless to say, the gargantuan troll-like conflict of interest that arises as soon as the foundation of the leading candidate for the presidency of the United States begins accepting money from overseas is apparent to every sentient being on the planet except members of the Clinton family and the growing number of advisers, consultants, strategists, pollsters, groupies, allies, and hangers-on whose livelihood depends on that family’s political success. “These contributions,” the foundation said in a statement to the Journal, “are helping improve the lives of millions of people across the world, for which we are grateful...”

...In its 14 years of existence the Clinton Foundation has raised a sum approaching $2 billion. A McClatchy analysis found that 40 percent of contributions in the last decade have come from foreign sources. “It’s a massive sum of money—though no one has done a story yet on how overseas programs they fund have worked,” Maggie Haberman of the New York Times noted on Twitter. Gee I wonder why. It’s almost as though the political press is morally and intellectually disarmed whenever it hears words like “global dialogue” and “wellness” and “economic development” and “women and girls,” as if the gritty, cynical, I’ve-seen-it-all correspondents for our major newspapers and networks turn to bubbling bittersweet goo as soon as some Clinton flack tells them, “We are working with global partners to build an evidence-based case for the full participation of women and girls in the 21st century,” and their eyes fall on a picture of a cute, vibrant, and diverse group of young women surrounding the aging potentate and her daughter and former NBC News special correspondent. What it would take the Post or the Times to dispatch a reporter to Ishmaelia or wherever to examine, in skeptical detail, just where the Clinton money is going, to report on the precise state of the President Peter Mutharika Water Reclamation Plant and Convention Center, is beyond me. Certainly the reports from Haiti are not encouraging. Even the Journal is not clear when the Clinton Foundation dropped its ban on foreign money, a mystery the Foundation itself does not seem to be in any hurry to solve.

One can always count on the media’s herd instinct, however, and in the hours since the initial Journal scoop and the Clintons’ flagrant doubling-down on buckraking from overseas interests, a group of stories has appeared that suggests the Clintons have a big problem on their hands. A Washington Post analysis “found substantial overlap between the Clinton political machinery and the foundation,” and noted that “nearly half of the major donors who are backing ready for Hillary, a group promoting her 2016 presidential bid, as well as nearly half of the bundlers from her 2008 campaign, have given at least $10,000 to the foundation, either on their own or through foundations or companies they run.” What do you think they want for all of that money? An Eid al-Fatr card?

McClatchy draws our attention to donors such as “Mohammed Al-Amoudi, a billionaire businessman who lives in Ethiopia and Saudi Arabia, retired German race car driver Michael Schumacher, and Denis O’Brien, the Irish chairman of Digicel phone company,” who “each donated between $5 million to $10 million.” You know, regular folks; American-Gothic types; the sort of common people who so puzzle Clinton that she is asking more than 200 policy wonks for advice on how to talk to them.

In other words, the Democrat frontrunner for the presidency appears to be bought and paid for by foreign governments.

Although, truth be told, it's likely that our current Democrat President had many of the same conflicts of interest, albeit with more surreptious means.

2 Billion WOW! That some real money!