Fair warning: put down your beer and prepare for a belly laugh: 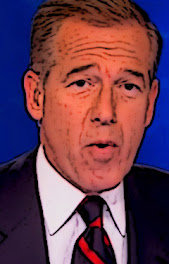 Shot: Brian Williams Told Alec Baldwin He Thought He Was Going To Die During Helicopter Attack That Never Happened


NBC News anchor Brian Williams told actor Alec Baldwin in March 2013 that he was afraid he was going to die when a Chinook helicopter he was riding in during the Iraq War was hit by a rocket-propelled grenade.

But as Williams admitted on Wednesday, he was never in a Chinook that came under fire on March, 23, 2003. Instead, he was in a helicopter miles behind the one that was hit... In his retraction and apology, Williams claimed that he inadvertently made up the story because he became confused after viewing so many different pictures from that day, causing him to suffer from a “fog of memory.”


In a 2007 lecture at New York University’s journalism school, NBC News host Brian Williams touted his “BS meter” when it came to credible news and mocked the credibility of bloggers, pitting himself—a man “developing credentials to cover my field of work”—against lowly bloggers who can’t always be trusted... ...Saying he had developed a "strong BS meter" himself, Williams went on to complain about the problem of unqualified bloggers, who, unlike himself, have not spent their lives "developing credentials" [sic]...

“You’re going to be up against people who have an opinion, a modem, and a bathrobe,” Williams told the audience. “All of my life, developing credentials to cover my field of work, and now I’m up against a guy named Vinny in an efficiency apartment in the Bronx who hasn’t left the efficiency apartment in two years… On the Internet, no one knows if you’ve been to Ramadi or you’ve just been to Brooklyn and have an opinion about Ramadi.”

Everybody's talking about this. Jon Stewart (America's most trust man in news) had Williams' daughter (an actress) on The Daily Show recently, where Stewart told Brian Williams jokes and admitted that he had a fish named Brian Williams. So I turned into The Daily Show tonight and...nothing.

Knowing how much NBC cares about the truth, I doubt that there will be any repercussions for this clown. At least if he gets to interview Hillary they can trade war stories of derring-do.