A Somali affiliate of al Qaeda has called for attacks against Western shopping malls, which they see as soft targets. The call for attacks was seen in a video celebrating the attack on the Westgate shopping mall in Nairobi, Kenya. 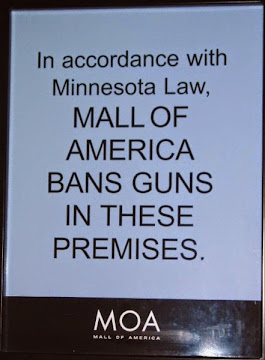 “If just a handful of mujahedeen [militant jihadists] fighters could bring Kenya to a complete standstill for nearly a week, just imagine what the dedicated mujahedeen could do in the West to American or Jewish shopping centers across the world,” a masked gunman says toward the end of the video. “What if such an attack were to occur in the Mall of America in Minnesota? Or the West Edmonton Mall in Canada? Or in London’s Oxford Street?”

The threats seem credible, but as people are banned from carrying firearms in all three locations, the “gun free zone” signs may provide some protection.

Virtually all of Canada and England are Gun Free Zones, as self defense is not considered a valid reason for citizens to carry guns in those countries. But a crucial difference exists in the United States. The malls in Canada and England lack the protection of gun free zone signs. In comparison, the Mall of America, in Minneapolis, has particularly large and prominent gun free zone signs, as shown above.

While gun free zone signs have failed in a number of locations, it may be that they were not large enough or prominent enough. John Lott, an academic who has studied these shootings, makes this statement.

At some time, people have to recognize that, with just two exceptions, at least since 1950, all the multiple victim public shootings in the United States have taken place where guns are banned. And you see these individuals, they surely act as if they’re trying their best to find areas where victims can’t defend themselves.

But Lott does not examine the effect of the gun ban signs’ prominence or visibility. Could it be that the attackers simply did not know that guns were banned in the area of their planned attack? Wouldn’t the large, highly visible signs at the Mall of America offer more protection? I found this documentary on YouTube:

In spite of Dr. Lott’s research, there have been only 18 documented cases where armed citizens stopped mass murders before the body count grew large.

The most prominent jihadist attack on a mall was the attack on the Westgate mall in Nairobi, Kenya. While guns were banned in the mall, there is no evidence that there were any signs to inform the Jihadis that guns were banned there. It may be that some jihadis cannot read, so signs with the prominent red circle and slash are likely best. As many jihadis like to use AK47 rifles, perhaps a sign with the AK and a red circle and slash would work better, as a jihadi might not understand that a sign showing a pistol being banned would also mean that an AK is not allowed.

After the Westgate attack, the Interpol Secretary General, Ronald Noble, said that we had a choice: either create intense levels of fortress like security for public places, or consider having an armed citizenry.

Interpol Secretary General Ronald Noble said today the U.S. and the rest of the democratic world is at a security crossroads in the wake of last month’s deadly al-Shabab attack at a shopping mall in Nairobi, Kenya – and suggested an answer could be in arming civilians.

In an exclusive interview with ABC News, Noble said there are really only two choices for protecting open societies from attacks like the one on Westgate mall where so-called “soft targets” are hit: either create secure perimeters around the locations or allow civilians to carry their own guns to protect themselves.

“Societies have to think about how they’re going to approach the problem,” Noble said. “One is to say we want an armed citizenry; you can see the reason for that. Another is to say the enclaves are so secure that in order to get into the soft target you’re going to have to pass through extraordinary security.”

Any evaluation of Mall of America security, in the face of the clear and present danger of a jihadi attack, should take the large and prominent Gun Free Zone signs into account. What could go wrong…?