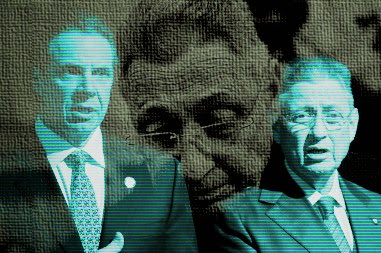 Despite persistent calls for former Assembly Speaker Sheldon Silver’s resignation, both from this site and from many prominent politicians, Governor Cuomo has stood steadfastly beside his friend and colleague. Through sexual harassment cover up after cover up, Cuomo refused to condemn Silver for his actions, his inactions, or otherwise.

Years went on as the Democrat piled up corruption allegations, and Cuomo stood idly by.

Recently, Silver was arrested on federal corruption charges for accepting over $4 million in kickbacks and bribes.

Now Cuomo insists he can’t be blamed for Silver being allowed to run a corrupt Assembly under his nose, throwing his hands up at the suggestion. In fact, he claims he’s no more responsible for Silver’s actions than President Obama was for Anthony Weiner’s discretions.

“If Anthony Weiner shows his private parts, do you blame Obama?” Cuomo told the New Yorker. “These are criminal acts of individual legislators. What would you have me do?”

Ah, but there’s one significant difference in that analogy, Mr. Cuomo.

Even the notoriously spineless President called Anthony Weiner out and suggested he resign, something you never did in the case of Sheldon Silver.

President Barack Obama has joined the ever-growing chorus of Democrats seeking the resignation of New York Rep. Anthony Weiner, putting even more pressure on the embattled lawmaker to quit the House in the midst of a sex scandal that seems to produce a new, embarrassing chapter with each passing day.

“I can tell you that if it was me, I would resign,’’ Obama said during an interview scheduled to air Tuesday morning on NBC’s “Today” show.

Now if the President could muster the courage to single out Weiner, what does that say about the Governor’s courage?

Assemblyman Steve McLaughlin told us in 2013 what the motivation was for Cuomo to avoid calling Silver out.

“Clearly Cuomo wants Silver standing, so that he can push his radical progressive agenda,” McLaughlin said.

Did that make Governor Cuomo guilty of enabling a culture of anti-women corruption in New York State?

Now Cuomo says he’s no more responsible than the President. What a joke.

Assemblyman McLaughlin issued the following statement to MenRec regarding Cuomo distancing himself from Silver:

“It’s not surprising that Andrew Cuomo wants to run away from his share of responsibility regarding the Sheldon Silver corruption charges. It’s not surprising because it is his standard operating procedure. He’s doing the same thing in denying all responsibility for the disaster he’s implemented regarding Common Core. Cuomo, like all weak leaders, wants all the credit and none of the blame. But here’s the facts; Cuomo was Attorney General for four years. Did he go after public corruption even though it was staring him in the face? No. He didn’t. Did Cuomo call for Silver to resign when Silver paid hush money to silence victims of sexual harassment? No. He didn’t. He turned a blind eye to Silver’s repeated misdeeds and corruption because it suited his needs. To make matters worse, Cuomo prematurely shut down an anti-corruption Moreland Commission because they were getting too close to something or someone. Was it Silver, their mutual donors, Cuomo himself? The U.S. Attorney is investigating and I think we’ll know soon enough the details of Cuomo’s involvement and responsibility. Although Silver is directly responsible for his alleged corruption, Cuomo enabled him by looking the other way.”

A statement announcing the arrest of Silver from the U.S. Attorney’s Office mentions “bribes and kickbacks” as amounting to “two-thirds of all of Silver’s outside income since 2002.”

Silver’s allegedly illegal outside income continued funneling in until his arrest last month.

Between 2006 and 2010 – four years – Cuomo served as Attorney General of New York state. Yet during that same time, Silver somehow managed to escape scrutiny.

Cuomo further looked the other way on Silver when he disbanded the Moreland Commission, in what would appear to be an obvious attempt at shutting down the investigation.

Either Cuomo, as Attorney General and Governor, enabled Silver as McLaughlin suggests, or he was and continues to be really bad at his job.

Corruption, sexual impropriety, tax evasion and lying are resume enhancements to Democrat politicians and in some cases they even win them elections.