Immigration: If President Obama, who has warned ICE agents of consequences if they do their job, had a son, he might look like Jamiel Shaw Jr., a young African-American killed by an illegal alien who shouldn't have been here. 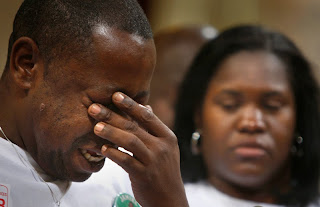 Shaw was a Los Angeles high school star dreaming of a good life ahead when he was gunned down on March 2, 2008, while walking home. He was picked at random, police said, possibly as part of a gang loyalty test for the illegal alien who shot him.

Charged with the crime was Pedro Espinoza, who'd been released just hours earlier from Los Angeles County Jail where he spent four months for brandishing a firearm and resisting arrest. Espinoza is an illegal alien.

Some will say, well, that was on President George W. Bush's watch. True, but it also occurred in Los Angeles, a sanctuary city where policy is not to cooperate with federal authorities on enforcing immigration laws or aid in deporting illegal aliens.

More than 36,007 aliens with criminal records and 88,000 crimes on their rap sheets were released back onto American streets by the administration in 2013.

In a letter sent to Obama last August, Donald Rosenberg, a self-described "lifelong, very liberal Democrat," said his 25-year-old son Drew, run over and killed by an illegal in 2010, would still be alive if Washington consistently deported illegals who have conflicts with law enforcement.

"My son, Jamiel Shaw II, was murdered while walking on his own street, three houses down from his home. An illegal alien on his first gun charge was visiting a neighbor when my son was coming home," Shaw testified. "He shot my son in the stomach and then in the head, killing him."

Shaw then asked an obvious question: "Do black lives really matter? Or does it matter only if you are shot by a white person or white policeman?"

Also on Wednesday, President Obama was telling employees at Immigration and Customs Enforcement that they had better enforce his executive amnesty orders or else.

Speaking at a Miami town hall meeting sponsored by MSNBC and Telemundo, Obama said "there may be (an) ICE official or Border Patrol agent not paying attention to our new directives. If somebody's working for ICE . . . and they don't follow the policy, there's going to be consequences to it."

He compared it to the military where soldiers "are expected to follow" orders given by their superiors. He forgot that soldiers are not obligated to follow an illegal order, that the legality and constitutionality of his executive amnesty is being challenged by 26 states and that a federal judge has temporarily halted its implementation.

The grief voiced by Jamiel Shaw Sr. and Donald Rosenberg is shared by too many. If ICE follows Obama's illegal orders to not enforce existing immigration laws, other American families will suffer the consequences of his actions.

I met his mother at a Tea Party event in Carlsbad, CA. She had a table where she was handing out material to make people aware of the problems with gangs and gang kills. It was about 2 years after her son was killed and I felt so sorry for her. I don't think parents ever get over something like this.

He compared it to the military where soldiers "are expected to follow" orders given by their superiors. Isn't this the same excuse that Nazi's used after WWII, that they were not to blame for what they did, but were just being good soldiers and following orders.


ICE Agents take the same oath of office uhbama does. The President cannot order anybody to "ignore" the law.

It is in it's self a "unlawful" order.