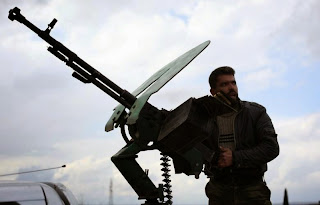 Brutal pictures emerged from Syria of a small Shi’ite child who was hanged by rebel forces after his entire family had been murdered.

The pictures were published by a human rights activists reporting from Iraq. Iraq’s news website, Qanon, reported that the rebels attacked the family in the Seyede Zainab neighborhood of Damascus.

The brutality of the rebel forces have largely gone unreported in the Western media (see RadicalIslam’s related video, “Media Bias Muddies Waters in Syria”). However, in recent days, online videos have surfaced showing how the rebels deal with those they perceive as loyal to the regime.

The United States has so far identified around 1,200 Syrian opposition fighters for potential participation in a US military-led program to help train and equip them to battle the Islamic State of Iraq and Syria (ISIS) group, the Pentagon said on Wednesday.

The fighters will undergo vetting for the program, which is expected to begin in March at multiple sites outside of Syria and train more than 5,000 Syrian fighters a year. Some 3,000 could be trained by the end of 2015, a US official said... The program is expected to vet fighters using both US government databases as well as intelligence from regional partners.

The architect of this insanity -- one Hillary Rodham Clinton -- seems to believe that setting the Middle East afire is a qualification to run for President.