More than two thirds of the Ohioans insured under Obamacare are covered by the law’s optional Medicaid expansion.

A total of 234,507 Ohioans have selected a private insurance policy through the federally run Obamacare exchange at HealthCare.gov, the U.S. Department of Health and Human Services reported Wednesday. 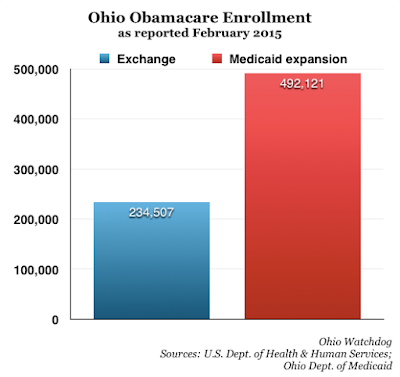 Millions of private health insurance policies nationwide were canceled as a result of Obamacare, but state and federal officials have not disclosed how many of the Ohioans covered under Obamacare were previously insured.

Ohio Medicaid beneficiaries currently pay no premiums, and — assuming they can find a doctor — they receive the same “minimum essential benefits” Obamacare requires for policies sold at HealthCare.gov.

Actual exchange enrollment is likely lower than reported by the Obama administration. HHS figures are inflated by including individuals who choose an exchange plan but never pay a premium, Forbes editor and Manhattan Institute senior fellow Avik Roy explained in a Wednesday story.

“These figures undermine any claim by John Kasich that he did not support Obamacare, as two times as many people enrolled in his Medicaid expansion as in the exchange,” Matt Mayer, president of free-market think tank Opportunity Ohio, wrote in an email to Ohio Watchdog.

Kasich, a Republican, says he is against Obamacare and supports its repeal. However, Kasich’s implementation of the Obamacare Medicaid expansion has been a huge win for the president’s unpopular 2010 health insurance law.

President Obama points to Kasich as an example for all Republicans to follow, and insists the biggest problem with Obamacare is the refusal of 22 states to expand Medicaid. In Ohio alone, Medicaid expansion cost federal taxpayers $2.1 billion last year.

Ohio Senate President Keith Faber and Ohio House Speaker Cliff Rosenberger, under pressure not to rock the boat while Kasich considers a 2016 presidential run, have signaled they will do nothing to unwind Kasich’s Obamacare expansion.

Federal funding for the expansion is set to drop from 100 percent to 95 percent in 2017, and has already been targeted for cuts by the president and Congress. At current spending and enrollment, Kasich’s Obamacare expansion would cost state taxpayers $30 million per month by 2020.

In 2010, Kasich complained that Medicaid expansion would “stick states with large and unsustainable costs.” Obamacare was written to force every state to expand Medicaid to millions of able-bodied, working-age adults with no dependent children.

Ohio joined a federal lawsuit with Florida and 24 other states asserting the federal government could not withhold traditional Medicaid funding from states rejecting the Obamacare expansion. The U.S. Supreme Court ruled in the states’ favor in 2012.

Angling for billions per year in new federal funding and suddenly unconcerned about the long-term costs, Kasich opted to implement the Obamacare expansion in 2013 and circumvented the Ohio General Assembly to do so.

Kasich has argued Ohio’s rejection of the Obamacare Medicaid expansion would send “Ohio’s tax dollars” to other states, and he claims the Obamacare expansion isn’t part of Obamacare.

The governor’s Office of Health Transformation did not respond to an Ohio Watchdog request for comment.

While Obamacare exchange plan selection has slowed, the Obama administration has celebrated skyrocketing Medicaid enrollment. As of mid-2014, Medicaid expansion was responsible for roughly 71 percent of Obamacare enrollment nationally.