WHAT COULD GO WRONG? U.S. Expects to Quadruple the Number of Syrian Refugees Imported into U.S.

In his bestselling book America Alone, the brilliant Mark Steyn summarized the challenges inherent in trying to integrate the West with a political ideology masked as religion.

Though there are many trouble spots around the world, as a general rule it's easy to make an educated guess at one of the participants: Muslims vs Jews in "Palestine", Muslims vs Hindus in Kashmir, Muslims vs Christians in Africa, Muslims vs Buddhists in Thailand, Muslims vs Russians in the Caucasus, Muslims vs backpacking tourists in Bali, Muslims vs Danish cartoonists in Scandinavia. The environmentalists may claim to think globally but act locally, but these guys live it.

With that as background, please consider "U.S. Expects to Quadruple the Number of Syrian Refugees Brought Here." 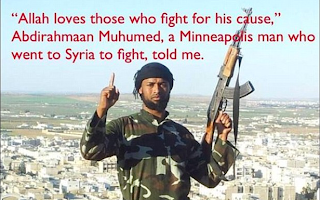 The United States has "a long tradition of welcoming refugees," and it expects to welcome thousands more of them from Syria in 2015 and 2016, despite concerns about foreign fighters, the State Department said.

"The United States has admitted 524 Syrians since 2011. We’re likely to admit 1,000 to 2,000 Syrian refugees for permanent resettlement in Fiscal Year 2015 and a somewhat higher number, though still in the low thousands, in Fiscal Year 2016," spokeswoman Jen Psaki told reporters on Friday.

...Psaki repeated that "one of our values is bringing in and welcoming refugees who have fled horrors around the world, and that continues to be central to what we believe in."

In response to a question, Psaki said she's aware of only "two incidents" involving "two Iraqis" who were admitted to Kentucky and were later accused of trying to send weapons and money to al Qaida in Iraq.

Far be it from me to challenge the genius of the Hillary/Kerry State Department, but one wonders whether Psaki needs a fungo-sized konk in the noggin from our legendary clue-bat.

According to State Department spokeserson Marie Harf, ISIS can be stopped in its tracks with a unique military strategy: offering the burgeoning Caliphate members entry-level jobs. Say, changing oil at JiffyLube or refilling the troughs buffets at Golden Corral.

Of course, an accurate representation of ISIS' goals would require candor and resolve, which is why you'll never hear a peep about any of that from the most transparent administration evah.