Israel’s reported strike January 18 on a joint Iranian-Hezbollah convoy driving on the Syrian Golan Heights was one of the most strategically significant events to have occurred in Israel’s neighborhood in recent months. Its significance lies both in what it accomplished operationally and what it exposed. 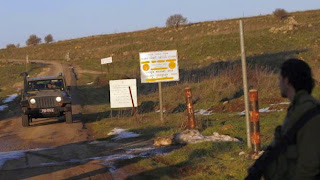 From what been published to date about the identities of those killed in the strike, it is clear that in one fell swoop the air force decapitated the Iranian and Hezbollah operational command in Syria.

According to a report by Brig.-Gen. (res.) Shimon Shapira, a Hezbollah expert from the Jerusalem Center for Public Affairs, the Iranian losses included three generals. Brig.- Gen. Mohammed Alladadi was the Iranian Revolutionary Guard Corps liaison officer to Hezbollah and to Syrian intelligence. He was also in charge of weapons shipments from Iran to Hezbollah. Gen. Ali Tabatabai was the IRGC commander in the Golan Heights and, according to Shapira, an additional general, known only as Assadi, “was, in all likelihood, the commander of Iranian expeditionary forces in Lebanon.”

The fact that the men were willing to risk exposure by traveling together along the border with Israel indicates how critical the front is for the regime in Tehran. It also indicates that in all likelihood, they were planning an imminent attack against Israel.

According to Ehud Yaari, Channel 2’s Arab Affairs commentator, Iran and Hezbollah seek to widen Hezbollah’s front against Israel from Lebanon to Syria. They wish to establish missile bases on the northern Hermon, and are expanding Hezbollah’s strategic depth from Lebanon’s Bekaa Valley to the outskirts of Damascus.

On Wednesday night, Yaari reported that the Syrian military has ceased to function south of Damascus. In areas not held by the al-Qaida-aligned Nusra Front and other regime opponents, the IRGC and Hezbollah have taken control, using the Syrian militia they have trained since the start of the Syrian civil war in 2011.

The effectiveness of Hezbollah’s control of its expanded front was on display on Wednesday morning. Almost at the same time that Hezbollah forces shot at least five advanced Kornet antitank missiles at an IDF convoy along Mount Dov, killing two soldiers and wounding seven, Hezbollah forces on the Golan shot off mortars at the Hermon area.

While these forces are effective, they are also vulnerable. Yaari noted that today, three-quarters of Hezbollah’s total forces are fighting in Syria. Their twofold task is to defend the Assad regime and to build the Iranian-controlled front against Israel along the Golan Heights. Most of the forces are in known, unfortified, above ground positions, vulnerable to Israeli air strikes.

THE IDENTITIES of the Iranian and Lebanese personnel killed in the Israeli strike indicate the high value Iran and Hezbollah place on developing a new front against Israel in Syria.

The fact that they are in control over large swathes of the border area and are willing to risk exposure in order to ready the front for operations exposes Iran’s strategic goal of encircling Israel on the ground and the risks it is willing to take to achieve that goal.

But Iran’s willingness to expose its forces and Hezbollah forces also indicates something else. It indicates that they believe that there is a force deterring Israel from attacking them.

And this brings us to another strategic revelation exposed by the January 18 operation.

Earlier this week, Iran’s Deputy Foreign Minister Hossein Amirabdolahian told Iran’s IRNA news agency that the regime had told its American interlocutors to tell Israel that it intended to strike Israel in retribution for the attack. The State Department did not deny that Iran had communicated the message, although it claims that it never relayed the message.

While the Obama administration did perhaps refuse to serve as Iran’s messenger, it has worked to deter Israel from striking Hezbollah and Iranian targets in Syria. Whereas Israel has a policy of never acknowledging responsibility for its military operations in Syria, in order to give President Bashar Assad an excuse to not retaliate, the US administration has repeatedly informed the media of Israeli attacks and so increased the risk that such Israeli operations will lead to counterattacks against Israel.

The US has also refused to acknowledge Iran’s control over the Syrian regime, and so denied the basic fact that through its proxies, Iran is developing a conventional threat against Israel. For instance, earlier this month, Der Spiegel reported that Iran has been building a secret nuclear facility in Syria. When questioned about the report, State Department spokeswoman Marie Harf sought to downplay its significance. When a reporter asked if the administration would raise the report in its nuclear negotiations with Iran, Harf replied, “No, the upcoming talks are about the Iranian nuclear program.”

Until this month, the White House continued to pay lip service to the strategic goal of removing Assad – and by inference Iran, which controls and protects him – from power in Syria. Lip service aside, it has been clear at least since September 2013, when President Barack Obama refused to enforce his own redline and take action against the Assad regime after it used chemical weapons against its opponents, that he had no intention of forcing Assad from power. But this month the administration crossed a new Rubicon when Secretary of State John Kerry failed to call for Assad to be removed to power in talks with the UN envoy in Syria Staffan de Mistura. Right before he met with his Iranian counterpart, Mohammad Javad Zarif, Kerry told Mistura, “It is time for President Assad, the Assad regime, to put their people first and to think about the consequences of their actions, which are attracting more and more terrorists to Syria, basically because of their efforts to remove Assad.”

IRAN’S PRESENCE on the Golan Heights is of course just one of the many strategic advances it has made in expanding its territorial reach. Over the past two weeks, Iranian-controlled Houthi militias have consolidated their control over Yemen, with their overthrow of the US-allied government of President Abed Rabbo Mansour Hadi.

Rather than defend the elected government that has fought side-by-side with US special forces in their Yemen-based operations against al-Qaida in the Arabian Peninsula, the administration is pretending that little has changed. It pretends it will still be able to gather the intelligence necessary to carry out drone strikes against al-Qaida terrorists even though its allies have now lost power.

The post-Houthi-conquest goal of the administration’s policy in Yemen is to seek a national dialogue that will include everyone from Iran’s proxy government to al-Qaida. The idea is that everyone will work together to write a new constitution.

It is impossible to understate the delusion at the heart of this plan.

Far beyond the region, Iran expands its capacity to destabilize foreign countries and so advance its interests. Last week, Lee Smith raised the reasonable prospect that it was Iran that assassinated Argentinean prosecutor Alberto Nisman two weeks ago. Nisman was murdered the night before he was scheduled to make public the findings of his 10-year investigation into the 1994 bombing of the AMIA Jewish Center and the 1992 bombing of the Israeli Embassy in Buenos Aires. According to Smith, Nisman had proof that Iran had carried out the terrorist attacks to retaliate against Argentina for abrogating its nuclear cooperation with Tehran.

From the Golan Heights to Gaza, from Yemen and Iraq to Latin America to Nantanz and Arak, Iran is boldly advancing its nuclear and imperialist agenda. As Charles Krauthammer noted last Friday, the nations of the Middle East allied with the US are sounding the alarm.

Earlier this week, during Obama’s visit with the new Saudi King Salman, he got an earful from the monarch regarding the need to prevent Iran from acquiring nuclear weapons. But it seemed to have no impact on his nuclear diplomacy with Teheran. The administration believes that Iran and Saudi Arabia will be able to kiss and make up and bury a thousand- year rivalry between Sunni and Shi’ite Islam because they both oppose the Islamic State. This too is utter fantasy.

Israel’s January 18 strike on Iranian and Hezbollah commanders in Syria showed Israel’s strategy wisdom and independent capacity. Israel can and will take measures to defend its critical security interests. It has the intelligence gathering capacity to identify and strike at targets in real time.

But it also showed the constraints Israel is forced to operate under in its increasingly complex and dangerous strategic environment.

Due to the US administration’s commitment to turning a blind eye to Iran’s advances and the destabilizing role it plays everywhere it gains power, Israel can do little more than carry out precision attacks against high value targets. The flipside of the administration’s refusal to see the dangers, and so enable Iran’s territorial expansion and its nuclear progress, is its determination to ensure that Israel does nothing to prevent those dangers from growing – whether along its borders or at Iran’s nuclear facilities.

Concurrently, the Democrats are refusing to attend the Israeli Prime Minister's speech before the USA Congress...due to "prior calendar commitments." And, a news leak came out today that the Obama Administration is actually going to provide technical assistance on Iran's nuclear efforts. I don't know if the leak is true but given Obama's lack luster previous foreign negotiations, the American people will be lucky if, in addition to hands-on help, Obama is agreeing to send Billions of dollars to Iran.