OBAMA WAS RIGHT: Muslims woven into the fabric of our national history (he just forgot the word "fighting")

President Obama has continually asserted that Islam was “woven into the fabric” of the United States since its founding. Obama claims that Muslims have made significant contributions to building of this nation. The claim is laughable to anyone who has studied US history. Historian David Barton spoke to Glenn Beck and tore the president’s claims apart. 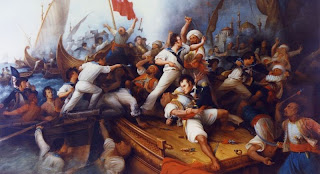 Barton found the first real contribution any Muslim made was in 1856 (80 years after the founding) when then Secretary of War Jefferson Davis hired one Muslim to help train camels in Arizona. Not exactly a resounding contribution, since the plan to fight Native Americans via camelback was soon dismissed.

But Muslims did have an influence on early America, and that influence was one of a foe. After winning its independence from England, American vessels no longer enjoyed British protection. France, dismayed that the US would not aid it in its war against England, also ceased protection of American ships. The result led to American vessels being raided and plundered by Muslim pirates from the Barbary Coast.

After agreeing to pay 10% of the new nations dismal GDP in exchange for passage, attacks continued. Thomas Jefferson, John Adams, and Benjamin Franklin were sent as representatives to mediate the problem. It was there that they discovered that the Islamic law the pirates followed made it their duty to attack non-Muslims.

“The ambassador answered us that [the right] was founded on the Laws of the Prophet, that it was written in their Koran, that all nations who should not have answered their authority were sinners, that it was their right and duty to make war upon them wherever they could be found, and to make slaves of all they could take as prisoners, and that every Mussulman who should be slain in battle was sure to go to Paradise,” Jefferson wrote to Secretary of State John Jay, explaining peace was not possible.

Ben Franklin wrote of his experience: “Nor can the Plundering of Infidels be in that sacred Book (the Qur’an) forbidden, since it is well known from it, that God has given the World, and all that it contains, to his faithful Mussulmen, who are to enjoy it of Right as fast as they conquer it.”

John Adams, in his report to Jay, wrote of the Muslim prophet Muhammad, and called him a “military fanatic” who “denies that laws were made for him; he arrogates everything to himself by force of arms.”

By the time Jefferson became president the Barbary coast was extorting 25% of US GDP and attacks were still occurring. Jefferson wasted no time in signing a war powers request which launched the US’s entire naval fleet to wage war on the Barbary pirates. The US Marines were born. Jefferson saw the fleet off, ordering the US sailors to chase the pirates all the way to Tripoli, giving rise to the famed verse from the US Marines’ anthem.

President Obama is correct when he says that Muslims shaped this country, just not in how he means. They provided the context and need for the US Marines and provided our first lesson in battling extremism: It cannot be appeased. Extremism must be routed out through force.

The post, that has been shared here, contains some real information that is important to know before investing.

The Marine Corps actually came into existence by order of the Continental Congress on November 10th, 1775; not as a result of the Barbary Pirates. They just kicked butt, led by Lt Presley O'Bannon.