The United States is under direct and sustained attack by the combined forces of the tyrannical far left and radical Islam, punctuated by humiliation abroad and despair at home. 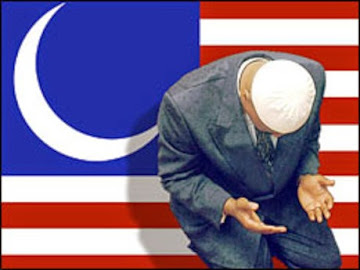 We are losing because unlike Walter Mitty, whose delusions were confined to his own head, Barack Obama has been permitted to play out his most destructive leftist and pro-Islamic fantasies in real-time from the most powerful office on the planet.

Obama behaves like a dictator not just because he is a narcissist, but because his political beliefs are, at their core, authoritarian. He represents a perfect anti-American storm, the amalgamation of twin totalitarian ideologies, Marxist-Leninism and Islamic extremism, both dedicated to the destruction of Judeo-Christian civilization.

Obama cannot counter threats from abroad because he is sympathetic to them, while simultaneously pursuing domestic policies that generate economic malaise, fiscal bankruptcy, and social chaos; conditions that undermine American democracy and are the foundation of his fundamental transformation of the country.

Obama would not be a problem, nor would he even be President, if we did not have a hopelessly corrupt political-media culture.

We are losing because the federal government has become an entity unto itself, no longer reflecting the consensus or the consent of the American people, operating outside of Constitutional restraints and, like Obama, promoting policies largely in conflict with the best interests of the country.

It is a government no longer designed to represent the people, but one solely dedicated to self-perpetuation. To politicians and journalists, truth has become a fungible commodity and, for the sake of political expediency, they have become generators for the mass production of misinformation.

Like the context of George Orwell's "Nineteen Eighty-Four," we are beginning to live in a country in perpetual crisis, growing government surveillance, misinformation and manipulation by state-sanctioned media; all governed by a privileged and oppressive political elite led by a quasi-divine party leader who enjoy an intense cult of personality and considers personal liberty as a source of unhappiness.

In essence, our government is embracing the very political and social attributes we should be opposing.

For example, speaking about the Islamic State (ISIS), Major General Michael K. Nagata, commander of U.S. Special Operations forces in the Middle East said "We do not understand the movement, and until we do, we are not going to defeat it."

Or, more to the point, perhaps we no longer understand ourselves and the values and traditions we represent; since we now appear to have difficulty defining the nature of a threat that beheads innocent civilians, immolates prisoners on camera, makes school girls sex slaves, murders religious minorities and seeks to destroy the United States.

The Obama Administration consistently genuflects at the altar of political correctness and broadcasts the diplomatic desire not to offend, seemingly more concerned with protecting the sensitivities of Islamists than the lives of their victims. This administration's egotism is only exceeded by their inability to grasp the extent of their own ignorance.

In contrast, U.S. Marines did not struggle to understand or combat the fanaticism and brutality of the Imperial Japanese military during World War Two, dampening the enthusiasm for such savage behavior with overwhelming firepower.

In the apparent attempts to dismiss Islamic extremism, Obama frequently engages in equivocation and moral equivalency as he did recently at the National Prayer Breakfast comparing the actions of the Islamic State to those of the Christian crusaders a thousand years ago.

It is the systematic suppression of facts or the altering of history that advances and sustains the self-defeating policies of the Obama Administration. It is as if the government has enlisted in the ranks of our enemies and is bearing arms against us.

When incompetence is ruled out, only mendacity remains.

And through all this, who do we choose as our Republican warriors? -- putzes Boehner and McConnell.