Through a blatant cut-and-paste collaborative partnership with The Conservative Treehouse, the following are President Obama's stern warnings for Iran.

And please scroll down for the punchline. 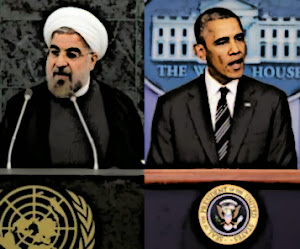 Then LAST August, just before heading off to his vacation on Martha’s vineyard:

[…] On Iran, the president said the chance that American efforts to strike a deal on nuclear weapons is “a little less than 50-50,” in part because some Islamic leaders may fear such a pact would loosen their grip on power.

“That may prevent us from getting a deal done,” Mr. Obama said. “It is there to be had. Whether ultimately Iran can seize that opportunity — we will have to wait and see, but it is not for lack of trying on our part.”

Oh, and now for the punchline:

During a press conference with visiting German Chancellor Angela Merkel earlier today, the president indicated a deal with Tehran is possible because “according to their Supreme Leader, it would be contrary to their faith to obtain a nuclear weapon".