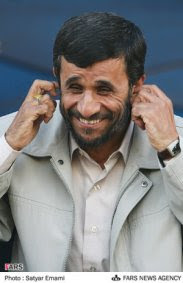 President Mahmoud Ahmadinejad has accepted an invitation to visit Baghdad, Iraq's Foreign Ministry said on Wednesday, a landmark trip that would make him the first leader of Iran to visit its former foe.

Iran and Iraq fought an eight-year war in the 1980s in which hundreds of thousands were killed, but relations have improved since Saddam Hussein was ousted in the U.S.-led invasion of Iraq in 2003 and a Shi'ite Islamist-led government came to power.

U.S. and Iranian officials were to have held a fourth round of talks in Baghdad in mid-December on curbing violence in Iraq but the meeting was put off. No new date has been set, U.S. embassy spokeswoman Mirembe Nantongo said.

The U.S. military said at the weekend there had been a sharp drop in the number of Iranian weapons being used in Iraq but no let-up in Tehran's training and financing of Iraq militias.

Memo to Mahmoud: watch out for the exploding Pizza.

Or the poisoned water.

Or the hair dryer with a teensy, weensy electrocution problem.

Have a relaxing stay!
at 8:46 PM
Email ThisBlogThis!Share to TwitterShare to FacebookShare to Pinterest
Labels: extremism, War