Yet another Clinton fraud?


Newsbusters reports that the Clinton Machine™ may have pulled off another scam.

Hillary Rodham Clinton's campaign stop was interrupted Monday when two men stood in the crowd and began screaming, "Iron my shirt!" during one of her final appearances before the New Hampshire primary... Clinton, a former first lady running to become the nation's first female president, laughed at the seemingly sexist protest that suggested a woman's place is doing the laundry and not running the country. 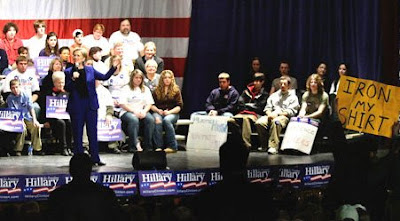 "Ah, the remnants of sexism — alive and well," Clinton said to applause in a school auditorium.

It turns out that the protesters work for Boston station WBCN 104.1 FM and were promoting a local show.