Gateway Pundit is covering the trivial news stories that your local newspaper somehow forgot to report. For example: 8,800 terrorists have been captured and 2,400 killed in Iraq in 2007, resulting in a dramatic reduction in violence against Iraqi civilians. That's gotta put a crimp in Al Qaeda's planning. 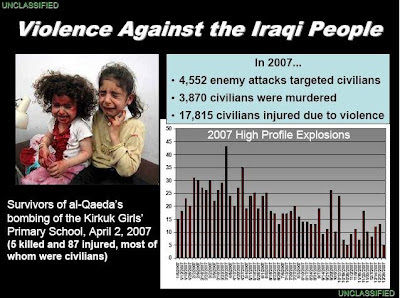 I guess the mainstream media has more important stories to cover. Like Britney Spears' escape from rehab, Texan UFOs, and the homeless killer veterans who are cutting a swath of destruction across this fair land of ours.

Meanwhile, the Democrats are arguing over who will leave Iraq faster so they can cede it to Iran's mullahs. I'm no geo-political expert, but I have a funny feeling that's not the best strategy for America.
at 8:28 PM
Email ThisBlogThis!Share to TwitterShare to FacebookShare to Pinterest
Labels: Democrats, extremism, War