* The Anchoress has a sobering gut-check for primary watchers. Caution: graphic photos -- an air-sickness bag is highly recommended. 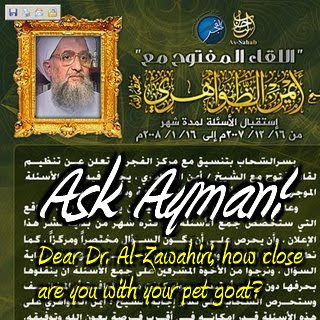 * Atlas highlights Iran's latest attempts to kill Americans. I wonder how many more Americans have to die at the hands of Iran's assassins before a President gets really, really, really p***ed off.

* The Belmont Club is warning servicemen and women that use Facebook about a serious threat. Al Qaeda is reportedly mining the social network for personal details of U.S. military personnel.

* Jammie Wearing Fool reminds us that only 24 hours remain to ask questions of Ayman al-Zawahiri during his web chat. JWF suggests several candidate questions, such as 'is Britney Spears really converting to Islam' and 'are Ron Paul's supporters are driving you as crazy as the rest of us?'

* Bizarre search o' the day: someone navigated to this august journal using a Google search for "dog urinating on hillary". Don't bother clicking on the link, there's no story there. In fact, there's no story of that ilk anywhere. So you've just got to wonder about some folks. And, no, I don't have any proof that it was a Ron Paul supporter -- just a queasy hunch.
at 8:28 PM
Email ThisBlogThis!Share to TwitterShare to FacebookShare to Pinterest
Labels: Linkfest, Protecting America