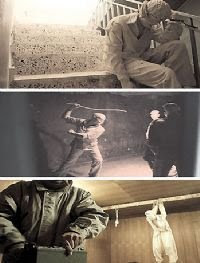 Despite the passage of 17 years since the liberation of the city of Sulaymaniyeh and the whole Iraqi Kurdistan region following the 1990-1991 uprisings against the former Iraqi Baathist regime, the traces of terror and suffering still remain in attestation of the brutality of the deposed regime.

The residents of Sulaymaniyeh still recall a dark time in which Saddam's Red Prison existed; a compound of cinderblock buildings, ranging over 3,000 square meters, in which the Red Security intelligence was based.

The torture chambers and solitary confinement cells in this 'red' compound have earned their name by virtue of the red paint that coats the facade of the buildings – a living testimony of the bloody legacy it left behind.

Today the site has been converted into a museum; a torture museum which is known as "The National Museum of the Kurdish Revolution and Victims (So That We May Not Forget)"...

Shhhh... no one tell the progressives.

They still think that the hazing stunts at Abu Graib qualify as torture.

Quick, someone hide the blowtorches and battery cables! Real instruments of torture could damage the delicate sense of Democrats' "moral equivalence".

...a Kurdish rebel hanging by his wrists from a metal hook, his arms bound behind his back -- a position intended to use the prisoner's weight to dislocate his shoulders.

He is dressed in the traditional Kurdish "sharwal" baggy pants and his shirt is partly untucked. Two electric alligator clips are attached to his earlobes from where wires run to a green hand-cranked electrical generator on a metal desk. His face is frozen in a moment of agony. The room is paneled in wood to muffle his screams.