In 2005, long before Mike Huckabee had been mentioned as a serious presidential candidate, the Arkansas Times ran a reprint of a horrifying article. 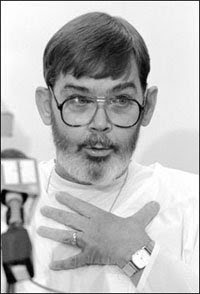 The occasion prompts us to republish Murray Waas' prize-winning article for the Arkansas Times in 2002 about the extraordinary steps Gov. Mike Huckabee took to help win Dumond's freedom. He has since blamed others for Dumond's release to kill again, but his actions over many years demonstrated his support for Dumond and, ultimately, the instrumental role he played in the parole board's decision to free him.

...Huckabee has denied a role in Dumond’s release, which has become an issue in his race for re-election against Democrat Jimmie Lou Fisher. Fisher says Huckabee’s advocacy of Dumond’s freedom, plus other acts of executive clemency, exhibit poor judgment. In response, Huckabee has shifted responsibility for Dumond’s release to others, claiming former Gov. Jim Guy Tucker made Dumond eligible for parole and saying the Post Prison Transfer Board made the decision on its own to free Dumond.

But the Times’ new reporting shows the extent to which Huckabee and a key aide were involved in the process to win Dumond’s release. It was a process marked by deviation from accepted parole practice and direct personal lobbying by the governor, in an apparently illegal and unrecorded closed-door meeting with the parole board...

Make sure you read the Times' "Special handling - How the Huckabee administration worked to free rapist Wayne Dumond."

And Ace has more on Huckabee's 1,033 clemencies.

Huckabee has no business running for Assistant County Sewer District Commissioner, much less the highest office in the land.
at 9:36 PM
Email ThisBlogThis!Share to TwitterShare to FacebookShare to Pinterest
Labels: Crime, Huckabee