• Outside the Beltway's James Joyner pinpoints Hillary Clinton's amazing proclivity for underhanded (and some would say criminal) activities. In this case, Hillary's campaign has called for the delegates from Michigan and Florida to be reinstated.

Hillary Clinton has issued a call to retroactively seat the delegates from Michigan and Florida that were ousted for holding their primaries earlier than allowed. She does so in the language of party unity... 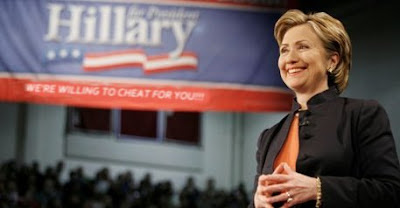 Of course, this is complicated somewhat by the fact that she ran unopposed in Michigan — because her opponents followed the rules and took their names off the ballot and she did not — and is expected to win Florida easily... Robert Prather observed in the previous post, “I suspect that this is only the beginning of the Clintons’ shenanigans...”

And this view isn’t just coming from the Clinton Derangement Syndrome infected Right Wing Conspiracy engaging in the Politics of Personal Destruction because they Hate Strong Women. ...[It's coming from] the Obama campaign...

I'm just wondering if Obama is considering using the RICO Statute to fight the Clinton Machine?

• Parkway Rest Stop has the dialogue from the next Clinton-Obama debate. Warning: a lot of dialogue is bleeped out. Make sure the kids have left the room before opening the page.

• Jonathan Chait, writing in the LA Times, reluctantly admits that the Right was right all along (hat tip: Dan Riehl). In this case, when it comes to the sleaze machine that is the Clinton Syndicate.

Something strange happened the other day. All these different people -- friends, co-workers, relatives, people on a liberal e-mail list I read -- kept saying the same thing: They've suddenly developed a disdain for Bill and Hillary Clinton. Maybe this is just a coincidence, but I think we've reached an irrevocable turning point in liberal opinion of the Clintons...

• Clifford May at the National Review provides excellent insight into how evil harnesses "the dark desires of restive crowds."

• Mark Steyn mourns the passing of Piglet.
at 8:22 PM
Email ThisBlogThis!Share to TwitterShare to FacebookShare to Pinterest
Labels: Linkfest