I'm still a novice at reading French, but Le Parisien (French for "The Fans of Paris Hilton") is reporting that a terrorist's widow has warned France that a major attack is imminent. Fatiha Mejjati, the wife of dead Al-Quaida terrorist Karim Mejjati, said that France would be "punished" for its loyalty to the United States. Karim was reportedly whacked in Saudi Arabia after he was linked to the 2004 Madrid Subway bombings. 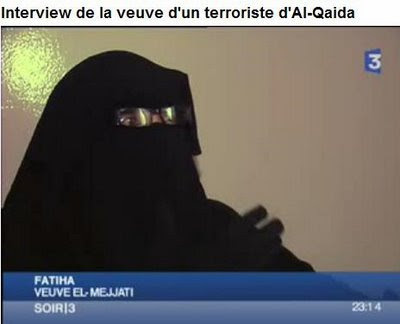 I know she's a widow, but she looks hot!
If I'm translating this article correctly, Al-Quaida is the infamous group of Militant Quakers who advocate waging "Quihad" (Quaker Holy War) to establish a global "Qualiphate".