Becta, a British organization that approves childrens' books, has officially rejected an updated version of The Three Little Pigs. Apparently, images of porkers offend militant Quakers, who are "sentenced to an eternity in hell" if they happen to flip a page and see an unexpected slice of bacon. 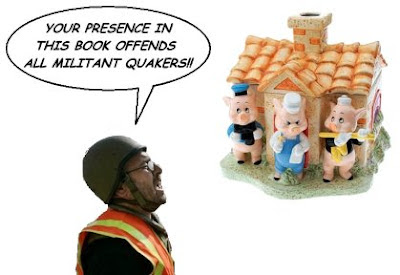 These freaking fictional pigs are really starting to tick me off. They've got some chutzpah, don't they?
at 10:11 PM
Email ThisBlogThis!Share to TwitterShare to FacebookShare to Pinterest
Labels: extremism