Most Americans are in cell-phone jail 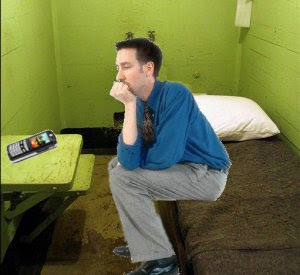 [In the cellphone economy, you can't] act like a rational consumer in a normal, functioning market economy. You don’t go buy the new phone, or get the cheap new plan. You don’t reward the more efficient company with your business. You can’t. You’re in jail.

Imagine if you couldn’t switch coffee shops or grocery stores without paying hundreds of dollars in penalties. Preposterous? No — not in the world of cell phones.

From the start, wireless providers have worked hard to lock you up into losing situations, constructing walls with cancellation fees, service-specific phones, and the loss of your phone number.

Worse yet — cell phone companies can, and do, change their side of the contract unilaterally. Consumers seemingly have no options to decline the higher prices. In other words, they can raise prices, and you can’t quit. Consider this note of complaint, filed with the Pennsylvania Public Interest Research Group by a consumer named Kerry:

I’m currently in the middle of a two-year contract with Verizon Wireless. They just notified me that they are dramatically increasing the charges I pay for receiving each text message from 2 cents to 10 cents.

When I called to complain, they left me with a few choices, and I was unhappy with all of them. I could simply accept the increase in charges. Alternatively, I could sign up for an unlimited text messaging plan for another $5/month, but only if I renew with Verizon for another two years. Or, I could end my contract and pay an early termination fee of $175.

If I don’t pay the fee and change my plan to get the best rate for text messaging, then I'm locked in with Verizon for even longer than I originally would have been had they just kept the rates the same. And since the new plan also has an early termination fee, I’ll face the same problem if they decide, without my agreement, to change the plan again to suit their needs...

Bob has some excellent advice for waging war against the telcos.

And long-term, is there anything that could transform the wireless environment for consumers? The hopeful answer is "yes".

A valuable swath of wireless spectrum will be auctioned off by the FCC starting tomorrow. Google, of all companies, is one of the qualified bidders. CIO Today speculates on what Google might be up to.
at 6:57 PM
Email ThisBlogThis!Share to TwitterShare to FacebookShare to Pinterest
Labels: FCC