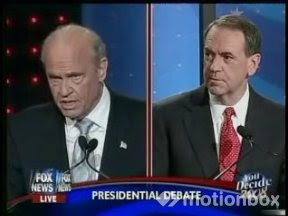 He believes that Guantanamo should be closed down and those enemy combatants brought here to the United States to find their way into the court system eventually. He believes in taxpayer-funded programs for illegals, as he did in Arkansas. He has the endorsement of the National Education Association, and the NEA said it was because of his opposition to vouchers. He said he would sign a bill that would ban smoking nationwide. So much for federalism. So much for states' rights. So much for individual rights. That's not the model of the Reagan coalition, that's the model of the Democratic Party.

No need for applause. This is just a blog.