"[Is it] that we are Arabs or is it because we are Muslims?"

“Does the problem lie in the fact that we are Arabs or is it because we are Muslims?”

...Zeweil asked this question in search of a convincing explanation for the failures of Arabs and Muslims to participate, even slightly, in the scientific renaissance that is taking place from East to West, from Japan to the United States bypassing Arab and Muslim regions... [but he also] said, “It is wrong to associate problems with Islam since our Muslim ancestors were the most prominent in the field of science.”

...Zeweil... continues to assert upon the fact that the appropriate environment for scientific research is absent in the Arab world. Out of appreciation, he explained that had it not been for the freedom of creativity in the United States he would never have progressed in the field of science to such an extent... The West is [also] developed in the fields of literature, arts, engineering, mathematics, politics and freedoms thus the renaissance and prosperity of science is simply one part of the “renaissance spirit”.

The West reached this point in fields of science and technology only through a prolonged philosophical, political and social struggle... The problem of scientific backwardness in the Arab and Muslim worlds is a reality and a catastrophe. A “Nature” [editorial recently stated that] “The Islamic world is leading news headlines across the globe (…) however there is a complete absence of any official or public debate regarding science and knowledge...

The answer is obvious to some Western observers. Islam must disconnect its legal system -- Sharia -- from religious practice. Muslims against Sharia is one group that has dedicated itself to precisely this cause. Without this separation, creativity and individual freedom are extinguished.

As John Lewis, writing in The Objective Standard observed: ...A government that turns its force against its own citizens, especially to impose an ideological doctrine on them, subordinates the rights of individuals to the demands of the State. This is statism—the elevation of the State over the individual, and the inversion of the very purpose of government. Statism is the greatest killer in history—dwarfing all attacks by criminals—precisely because it is motivated by some form of mystical political ideology. Because statists claim an authority that is above the rights of man—whether the Fuehrer’s master race, the communists’ dialectic, or the theocrat’s God—they do not recognize the principle of individual rights or the self-ownership of men on earth; rather, they claim the right to rule men, and to kill with impunity anyone who disobeys the ideology or regime...

One method for stripping Sharia from Islam may lie in the text the Koran itself. The Wall Street Journal's Andrew Higgins reports that a cache of documents -- thought lost during World War II -- has been found. The documents allow for the first serious research on Islam's holy text in decades.

On the night of April 24, 1944, British air force bombers hammered a former Jesuit college here housing the Bavarian Academy of Science. The 16th-century building crumpled in the inferno. Among the treasures lost, later lamented Anton Spitaler, an Arabic scholar at the academy, was a unique photo archive of ancient manuscripts of the Quran... The cache of photos survived.. and a Quran research project buried for more than 60 years has risen from the grave. 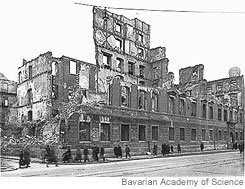 ...The revived Quran venture plays into a very modern debate: how to reconcile Islam with the modern world? Academic quarrying of the Quran has produced bold theories, bitter feuds and even claims of an Islamic Reformation in the making. Applying Western critical methods to Islam's holiest text is a sensitive test of the Muslim community's readiness to both accommodate and absorb thinking outside its own traditions.

...The Quran is viewed by most Muslims as the unchanging word of God as transmitted to the Prophet Muhammad in the 7th century. The text, they believe, didn't evolve or get edited. The Quran says it is "flawless" and fixed by an "imperishable tablet" in heaven. It starts with a warning: "This book is not to be doubted."

[One scholar] claims that chunks of it were written not in Arabic but in another ancient language, Syriac. The "virgins" promised by the Quran to Islamic martyrs, he asserts, are in fact only "grapes..." The [research] task, says Mr. Kunitzsch, grew steadily more sensitive as Muslim hostility towards Western scholars escalated, particularly after the founding of Israel in 1948. "He knew that for Arabs, [the Quran] was a closed matter..."

The research on the origins of the Koran will take a decade or more. If the document is found to have evolved over time and not "etched in stone" from the moment of its creation, it may provide a lever for freeing Islam from its legal system.
at 6:48 PM
Email ThisBlogThis!Share to TwitterShare to FacebookShare to Pinterest
Labels: extremism, War