Hillary Clinton: the "Worst Abuser of Earmarks" in Congress


Twice in one year? Linking to the Huffington Post? No, I'm not feverish. John K. Wilson's "Clinton By Far Worst Abuser of Earmarks" is a must-read.

In the fiscal 2008 omnibus appropriations bill Hillary Clinton received 261 earmarks, more than five times the number of any other presidential candidate. According to Taxpayers for Common Sense, Clinton obtained 360 earmarks worth $2.2 billion from 2002 to 2006. This record establishes her as by far the worst abuser of earmarks among all presidential candidates in both parties. 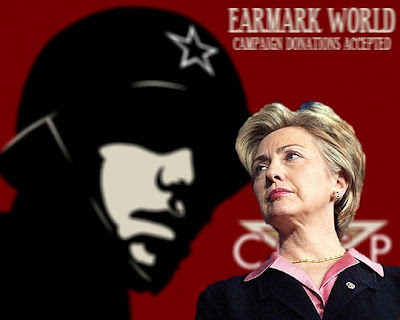 Clinton's earmarks are an important issue for Democrats who worry about the growing corporate control over their party. But the earmark issue may be even more important in the general election because it could become the swing issue this fall allowing the presidency to remain in Republican hands.

Hillary Clinton's $1 million earmark for a museum to celebrate the 1969 Woodstock music festival could become one of the biggest issues of the 2008 campaign... [that] earmark raises further questions about [a] corrupt system... On June 21, 2007, Clinton and Charles Schumer's $1 million earmark for the Woodstock museum was approved by a Senate committee. Nine days later, billionaire Republican Alan Gerry, the driving force behind the museum, donated (with his wife) the maximum of $9,200 to Clinton's presidential campaign. That same week, Gerry and his family gave $20,000 to the Democratic Senatorial Campaign Committee run by Schumer. Since 2005, the Gerrys have donated $18,600 to Clinton.

This wasn't the only Clinton earmark in 2007 to raise questions about timing. On June 27, 2007, Clinton and Schumer earmarked $900,000 for the Cold Spring Harbor Laboratory, where James D. Watson was the chancellor until he resigned in October 2007 for making racist remarks. Watson has donated more than $70,000 to political candidates and PACs, and gave $3,000 to Clinton's presidential campaign on May 17 and June 25...