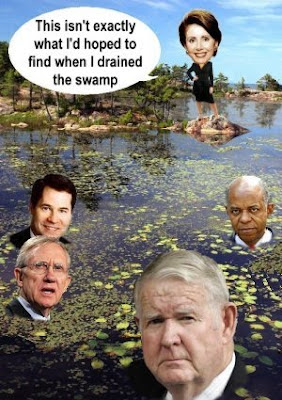 Hillary and Bill are obsessed with that Napoleonic sense of total certainty. That's how Hillary had the breath-taking gall to cobble together a centralized plan for one-seventh of the US economy, the entire health-care sector. In today's 13 trillion-dollar economy that would be almost two trillion dollars per year -- more than the Gross Domestic Product of Italy. Think of the mind-boggling presumption needed to believe that one person can dictate that much economic activity in minute detail. But Hillary was determined to dictate how many doctors would go into each specialty, how many would be assigned to rural areas and inner cities, and what racial composition would be demanded for medical school admissions. That kind of rock-hard belief in one's own divine rightness is deeply irrational.

* It's not just MLK. Gateway Pundit ("The Race Wars Continue") describes the propaganda battle being waged within the Democratic Primary and aimed at Hispanics.

* Rick Moran answers the question "Who is the anti-soundbite candidate?"

* PrairiePundit demonstrates that the UK's political correctness crowd just parsed itself into an hysterical conundrum.

* Newsbusters' Tim Graham straps the hyperbole-meter on Chris Matthews and then watches quietly as the needle shatters its housing.
at 5:58 AM
Email ThisBlogThis!Share to TwitterShare to FacebookShare to Pinterest
Labels: Democrats, Linkfest