"Hillary Clinton: She'll say anything and change nothing" 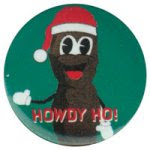 In the latest RCP poll, Barack Obama leads Hillary Clinton 39.3 to 28.3. Native South Carolinian John Edwards pulled down a pathetic 15.7% from the folks who presumably know him best.

Meanwhile, what the candidates are slinging looks less like mud and more like Mr. Hankie's family reunion.

In the latest brouhaha, Hillary was forced to pull a controversial ad in South Carolina. 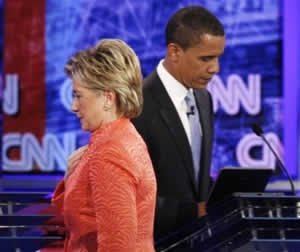 Under fire for airing misleading attacks on Sen. Barack Obama, the Clinton campaign has pulled a radio ad that quoted the Illinois senator calling Republicans "the party of ideas" and suggesting he thought those ideas superior to Democratic ones. But the Obama campaign has already counter-punched, launching a new radio spot saying Sen. Hillary Rodham Clinton will "say anything" to get elected.

The Clinton campaign did not immediately explain why it had pulled its radio spot, which had triggered a furious response from the Obama campaign and touched off a wave of criticism from Democrats who said the Clinton campaign has grown excessively aggressive in recent days. The Obama ad was no less fierce. It reminded voters that Clinton had voted to authorize the war in Iraq, saying she "voted for George Bush's war," and accused her of making "false attacks" on Obama.

"Hillary Clinton: She'll say anything and change nothing," the ad says.

That's a hell of a t-shirt slogan!

And would it be impolite to giggle at this point?
at 7:29 PM
Email ThisBlogThis!Share to TwitterShare to FacebookShare to Pinterest
Labels: Democrats, Hillary, Obama, War