Dick Morris opines that as Bill Clinton's temper becomes more visible, it serves as an increasing liability for Hillary's campaign. He recalls a tantrum that was first publicized nearly two decades ago. 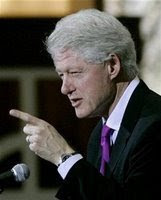 ...in 1990... during his last gubernatorial race... he was falling behind in the polls... When he learned of his decline... he immediately blamed me, accusing me of spending too much time with other clients. Yelling and screaming, he escalated his charges, refusing to listen to me tell him that his latest ad had not been on television yet when the poll was completed. He kept ranting.

Finally, I had enough. I stood up and said I was leaving, quitting the campaign. I grabbed my coat and headed out of the mansion. As I crossed the foyer, I suddenly fell to the ground, tackled by Bill Clinton. I saw his large fist coming at me. Hillary was trying to get between us, yelling “Bill, Bill, stop it. Think about what you are doing. Bill, stop it!”

Bill got up and I walked out the door. Hillary ran after me. She tried to calm me and asked me to walk around the grounds of the Mansion with her. “He only does this to people he loves,” she told me...

Gateway Pundit has the ten-year anniversary clip celebrating another masterful trait of the ex-president.


Don Surber pops the cork on the champagne as well.
at 9:00 AM
Email ThisBlogThis!Share to TwitterShare to FacebookShare to Pinterest
Labels: Democrats, Hillary