In the Fred Thompson administration, there will be no need for the leaders of terrorist states to visit Ground Zero; Ground Zero will be visiting them. 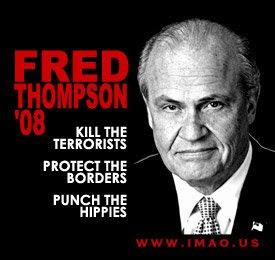 If strangling Socialists with their own intestines is wrong, Fred Thompson doesn't want to be right.

The Klingon word for bitchin' is "Fred Thompson."

Fred Thompson is not your "bro" and he will tase you.

Fred Thompson has, on one or more occasions, pronounced "nuclear" correctly.

Fred Thompson used to be quite the ladies' man before he married Jeri. In fact, there's a fifty percent chance he's your real father.

In a fight between John Wayne and Chuck Norris, Fred Thompson would win.

Fred Thompson will spend Christmas Eve this year the same as he traditionally does: managing a crisis at Washington Dulles International Airport.

Even annoying yip-yip dogs fall silent in the presence of Fred Thompson.

Fred Thompson has promised to fight and win at least one world war within his first one hundred days.

In a debate, Fred Thompson follows up any rhetorical point he scores with an awesome guitar solo.

Oh, and Fred's inviolable principles are:

The Environment. For too long, we have yielded to the forces of natures. Instead, the nature should bend to our will. We must tame it like a beast as use it as yet another tool to destroy our enemies. If nature will not yield to us, then it must be destroyed starting with the sun.

Space Exploration. We lay claim to all the universe. We must continue to explore space to see if any life forms are occupying our property and punish them.

Border Security. America deserves a giant wall on both borders made from human bones.

Military Technology. We need weapons that launch fireballs at our enemies. Enemies of America deserve to be hit with fireballs.

Foreign Countries. Foreign countries are an affront to our sovereignty. Their mere existence suggests that someone would prefer to live somewhere else than the U.S. For this blasphemy, we must destroy all foreign countries and punish those who support them.

Education. Children are stupid. Someone needs to do something about that or I will destroy them.

Terrorism. We must make our enemies know that Allah is not nearly powerful enough to protect them from our wrath.

Via IMAO (hat tip: The End Zone)
at 11:55 PM
Email ThisBlogThis!Share to TwitterShare to FacebookShare to Pinterest
Labels: Thompson