It could "overthrow rulers and topple kingdoms"

What if scholars can prove beyond reasonable doubt that the Koran was not dictated by the Archangel Gabriel to the Prophet Mohammad during the 7th century, but rather was redacted by later writers drawing on a variety of extant Christian and Jewish sources? That would be the precise equivalent of proving that the Jesus Christ of the Gospels really was a composite of several individuals, some of whom lived a century or two apart. 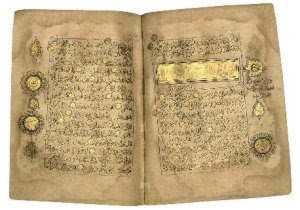 It has long been known that variant copies of the Koran exist, including some found in 1972 in a paper grave at Sa'na in Yemen, the subject of a cover story in the January 1999 Atlantic Monthly. Before the Yemeni authorities shut the door to Western scholars, two German academics, Gerhard R Puin and H C Graf von Bothmer, made 35,000 microfilm copies, which remain at the University of the Saarland. Many scholars believe that the German archive, which includes photocopies of manuscripts as old as 700 AD, will provide more evidence of variation in the Koran.

The history of the archive reads like an Islamic version of the Da Vinci Code...

It took Christianity hundreds of painful years to separate its legal system from its religious practices. Is it also possible that Islam will eventually detach its religious law (Sharia) from its spiritual practices?
at 9:03 PM
Email ThisBlogThis!Share to TwitterShare to FacebookShare to Pinterest
Labels: extremism