USC's Annenberg School for Communication & Journalism confirms what we all suspected: President Obama's Jobs Act is yet another money-laundering scheme.

California could receive more than $3 billion from the president's American Jobs Act, preventing the layoffs of roughly 30,000 people employed in education across the state, State Superintendent of Public Instruction Tom Torlakson said Monday. 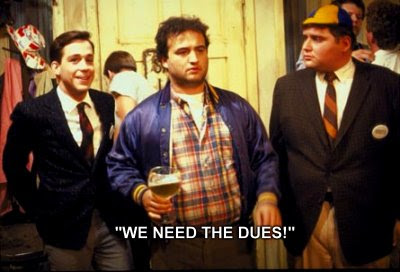 ...Obama announced his plan to send the new jobs proposal to Congress late Monday. His $447 billion jobs proposal allocates $35 billion to prevent layoffs of up to 280,000 teachers nationwide.

For Obama, it's all about the unions. Remember: the public sector unions are funded by you, the American taxpayer. The unions take their members' dues and funnel them back into Democrat politicians' campaigns.

To complete the nefarious circle, the Democrats then use class warfare rhetoric and giveaways to convince enough weak-minded drones that more wealth redistribution -- stealing from the makers to give to the takers -- is both moral and warranted.

We must defeat the Democrat leeches in 2012, before the number of takers overwhelm the makers.