And who could blame him? After all, the Weiner stench is known to be ruinous, sort of like a carpet that's been damaged by floodwaters.

Newly sworn-in Republican Rep. Bob Turner’s family ordered a thorough cleaning of the House office space he inherited from his disgraced predecessor, Anthony Weiner, after finding an old “Anthony’’ toothbrush in the bathroom.

The discovery of Weiner toiletries grossed out the newcomers, who requested that the congressman’s bathroom in Office 2104 of the Rayburn building be sanitized, sources said. 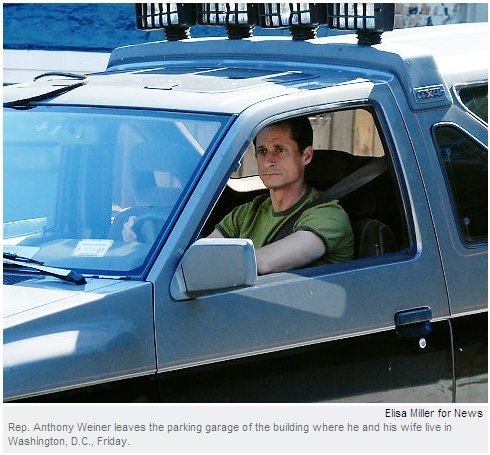 Weiner resigned in June amid a sexting scandal in which he tweeted crotch shots and naked photos to young women, including from an office chair... “Weiner left his toothbrush behind! It literally says ‘Anthony’ on it,” an insider said...

Turner’s wife, Peggy, a registered nurse, personally requested that congressional cleaners be brought in to scrub the bathroom, the insider said... There also was talk of replacing the carpeting and Weiner’s office chair...

I hear that, given all of the negative publicity plaguing him, Weiner now becomes very stiff in social situations.