Yes, it's another success story for Democrat leadership! 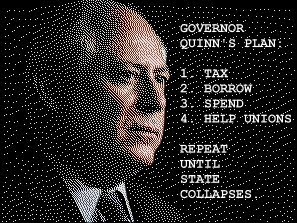 Despite a major income tax increase, the state of Illinois is expected to end the budget year more than $8 billion in the red...

...In all, the state will be $8.3 billion short on June 30 if nothing is done, according to the report. The majority of that money, roughly $5.5 billion, will come in the form of unpaid bills from companies that provide everything from meals for the elderly to toilet paper for prisoners. Another $1.2 billion is composed of Medicaid payments the state will push off until the next budget year, while the remaining $1.6 billion is owed to companies for tax returns and health insurance bills for state workers.

...Msall is calling on lawmakers to rein in pension costs by limiting benefits for current employees. It's an effort led by House Republican leader Tom Cross of Oswego that has been met with skepticism from some leading Democrats, including [Democrat Governor] Quinn.

...Meanwhile, Democratic Rep. Frank Mautino of downstate Spring Valley said lawmakers can ease some of the budget burden by borrowing to pay off the backlog of bills... More borrowing is an idea the Civic Federation has opposed, contending that the state's reliance on loans leads to higher debt payments that ultimately means less money to spend on daily operations.

This is also the Democrats' plan at the federal level in microcosm. Rather than living within their means, these reprehensible hacks instead want to fight the growing budget deficit by... borrowing more money.

But I can understand their reluctance to slash: there's nothing to cut!

• Law gives huge pension perks to union leaders: "All it took to give nearly two dozen labor leaders from Chicago a windfall worth millions was a few tweaks to a handful of sentences in the state's lengthy pension code... The changes became law with no public debate among state legislators and, more importantly, no cost analysis...

Twenty years later, 23 retired union officials from Chicago stand to collect about $56 million from two ailing city pension funds thanks to the changes."

• One-day rehiring nets former Chicago labor leader a $158,000 city pension: "Gannon is eligible for the lucrative pension deal only because City Hall rehired the former Streets and Sanitation Department worker for a single day in 1994, then granted him an indefinite leave of absence... State law allowed Gannon to retire from the city in 2004, the year he turned 50; since then, he has received about $1 million from his city pension. He stands to collect approximately $5 million during his lifetime...

...Until last year, that pension came on top of Gannon's union salary, which had grown to more than $240,000. He now draws the pension while working for a hedge fund, Grosvenor Capital Management, that does work with public pensions, including the Teachers Retirement System of Illinois. The firm also was one of Mayor Rahm Emanuel's largest campaign contributors."

I'm just wondering at what point the electorate revolts. Or do they just surrender and let Illinois collapse without a fight?

You sure this isn't Kalifornia? Oh wait, under Jerry 'Moonbeam' Brown the numbers much larger, sorry.

Illinois has been run by a 1 party state legislature forever !!!
If you want to see how "bipartisanship" works the best, look at Illinois.
All the political pigs in Illinois feed at the same trough.

We have one huge crooked party in Illinois

This will not get better until elections are under control of honest people.

Stalin said, "It matters not who votes, it only matters who counts the votes."

Who says we will vote again!

That's just going to lead to foot and ankle injuries...