I was never great at math, but $735 million for 45 permanent jobs seems like an, eh, less-than-optimal solution:

It’s as if Solyndra never happened. The Obama Administration is giving $737 million to a Tonopah Solar, a subsidiary of California-based SolarReserve. PCG is an investment partner with SolarReserve. Nancy Pelosi’s brother-in-law happens to be the number two man at PCG... 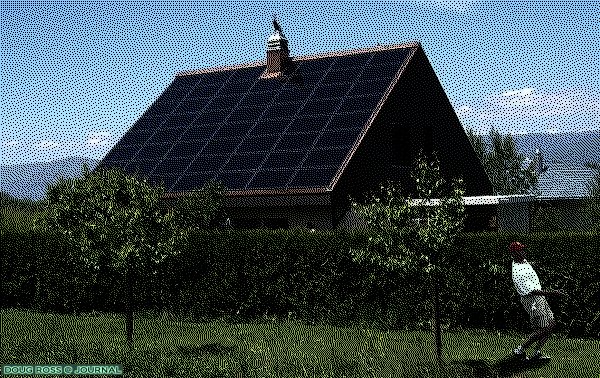 The Energy Department announced Wednesday that is has finalized a $737 million loan guarantee for a Nevada solar project. [This comes] several weeks after a California-based solar manufacturer that received a $535 million loan guarantee from the Obama administration in 2009 filed for bankruptcy and laid off 1,100 workers, setting off a firestorm in Washington.

The $737 million loan guarantee will help finance construction of the Crescent Dunes Solar Energy Project, a 110-megawatt solar-power-generating facility in Nye County, Nev. The project is sponsored by Tonopah Solar, a subsidiary of California-based SolarReserve.

I don't want to say 'told ya so', but on March 4, 2009 I posted "Mission Accomplished -- President Obama Nukes the Economy".

It wasn't a great feat, because anyone with a rudimentary understanding of economics, history and logic could have predicted the same damn thing. Which rules out Democrats.

More like 40 billion dollars. And dozens of jobs created!

Wonder how many more 'friends of the family' or Solyndra's are on that list?

Well, this qualifies as today's sharp stick in the eye. I can count on at least one per day from The One and his band of rogues.

and they wonder why 99% of the "rich" do not want to pay higher taxes.

Pelosi's relative just acquired 737 Million dollars in Federal loans for the
company "Tonapah Solar".
http://directorblue.blogspot.com/2011/09... [1]
If you believe as I do that the money will not be repaid, simply purchase a
CDS (credit default swap) against the impending default,. We'll get a huge amount of OUR money back, and cripple the banks. Maybe even buy them
specifically from the bank you find the most evil. Buy several, they are cheap, and you can bet Pelosi is buying one or more as well!
Do the research, this is how banks made trillions by destroying the housing market!