If these similarly themed incidents don't smack of dry runs, I'm not sure what might qualify. 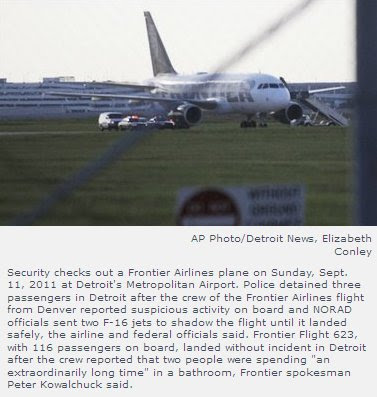 ...The incident aboard American Airlines Flight 34 to New York from Los Angeles began at 3 p.m. EDT when the plane's crew notified homeland-security officials of passengers allegedly behaving suspiciously. Two military jets shadowed the plane until it landed safely at John F. Kennedy International Airport at 4:10 p.m. EDT... Police greeted the plane at the gate and interviewed some of the passengers after they landed. It wasn't clear whether any charges would be filed...

...A similar incident played out aboard Frontier Flight 623, which originated in San Diego with a stop in Denver before arriving at Detroit Metro Airport... Two passengers were observed "spending an extraordinarily long time in the lavatory," Frontier spokesman Peter Kowalchuk said... the plane was swept for explosives, and was cleared. Three passengers were removed from the plane and taken into custody, authorities said.

In both cases, multiple passengers locked themselves in lavatories for an extended period of time, alarming crew-members. 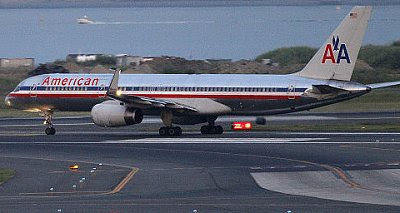 Police detained three passengers at Detroit's Metropolitan Airport on Sunday after the crew of the Frontier Airlines flight from Denver reported suspicious activity on board and NORAD officials sent F-16 jets to shadow the flight until it landed safely... Flight 623, with 116 passengers on board, landed without incident in Detroit after the crew reported that two people were spending an unusual amount of time in a bathroom...

The Airbus 318 taxied to a pad away from the terminal and police took three passengers into custody... Authorities cleared the aircraft after it was search [sic], the Transportation Security Administration said... Luggage had been removed from the aircraft to be inspected by K-9 police sniffer dogs.

The crew had reported that at least two individuals were spending "an extraordinarily long time" in the bathrooms. The three removed from the plane in handcuffs included two men and a woman.

In the case of American Airlines Flight 34, odd behavior in the area of the plane's lavatories was also observed.

Sources told CBS News, the three passengers on Flight 34 were disruptive, moving in and out of lavatories, even at one point locking themselves inside.

American Airlines spokesman confirmed that the incident began with "suspicious behavior" observed in the area of the jetliner's lavatory... three passengers refused to come out of a bathroom on a flight originating in Los Angeles.

I, for one, suspect Militant Quakers.

How hard would it be to have an external override key for the lavatories? You can't even try on clothing in a department store except someone has a key to your door. And they're just protecting merchandise.

>>I, for one, suspect Militant Quakers.


I was thinking Roman Catholics and Southern Baptist.

Naw, sTevo, Reformed Zoroastrian Nudists Alliance is more the type to lock themselves in lavatories for an extended periods of time.

it's our way of worship.

Glad they didn't find anything, but it does seem that their reaction was a bit exagerated.