Van Jones: Dude, Like 80% of Americans Are Marxist Crackpots Ready to Launch an "October Offensive" Against the Man 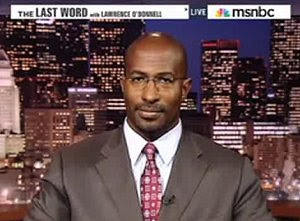 Consider the recent interview of "Conversion Van" on MSNBC (that's the nickname he prefers, I hear) regarding the massive grassroots movement for oppression and tyranny:

We are going to build a progressive counterbalance to the tea party. Eighty percent of Americans agree with everything that you say on this show, but we have no voice. We know that jobs are more important, and this phony, made-up deficit stuff they talk about. We know that people who have done well in America should do well by America and start paying America back in the form of more fair taxes.

Hey, schmuck: here's the phony and made-up deficit, courtesy of Barack Obama, which just happens to have resulted in the first downgrade of United States debt in history:

People who benefited from the bailouts and from the tax breaks should start paying America back. They're doing great.

Everybody else is suffering. That is 80 percent of the majority. And we're going to now have a voice.

But let's not clutter this post with facts, let's go back to TranVan:

"And you're going to see an American fall, an American autumn, just like we saw the Arab spring. You can see it right now with these young people on Wall Street. Hold onto your hats. We're going to have an October offensive to take back the American dream and to rescue America's middle class."

Or you're gonna take over Wall Street? Like the 33 losers that got pepper-sprayed, tased, stripped nekkid and covered in powdered sugar*?

Dude: let me lay it down real simple for you.

Say goodnight, Van. Because in 2012, we're going to flush all of you Marxist crackpots out of office. And you can go back to being the fringe Leftist kook you were before 2008.

And may I be the first to say: buh-bye.

If I had to pick a word for this jack wagon I'd pick....delusional.

Who do Van Jones and Company plan to revolt against? Democrats control the Supremes, the White House and the Senate. So the MAN is really Obama this time - a black Marxist. Jones has been talking smack for a while now but he has yet to deliver on anything.