Responding to the President's exhortations to "pass this jobs bill now", Senate Democrats oblige by taking a pass

Chicago's powerhouse WLS-AM radio station has confirmed what Mark Levin surmised last week: when it comes to President Obama's "Jobs Bill", Democrats are running from Obama as fast as they possibly can.

On Tuesday, President Barack Obama tried to keep the pressure on Congress to consider his nearly $450 billion jobs bill, saying it had been two weeks since he sent the bill to Capitol Hill "and now I want it back."

...So why have Democrats delayed action in the U.S. Senate on President Obama’s stimulus bill?

WLS Radio’s Bill Cameron reports his own party has delayed action in the Senate and talked with Senator Dick Durbin, the number two Democrat in the Senate, about the reason why. 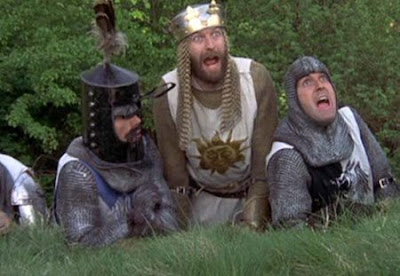 RUN AWAY!!!
“The oil-producing state senators don’t like eliminating or reducing the subsidy for oil companies, “ Durbin tells WLS Radio, “There are some senators who are up for election who say I’m never gonna vote for a tax increase while I’m up for election, even on the wealthiest people. So, we’re not gonna have 100% Democratic senators. That’s why it needs to be bi-partisan and I hope we can find some Republicans who will join us to make it happen.”

But so far, Durbin concedes Democrats don’t have the votes in the senate to pass it, “Not at the moment, I don’t think we do but, uh, we can work on it."

Liberalism is most assuredly a mental affliction, but the survival instinct is strong in these drones. So we'll have to pry each and everyone from their white-knuckled grip on power using a crowbar and a taser.

“There are some senators who are up for election who say I’m never gonna vote for a tax increase while I’m up for election, even on the wealthiest people. So, we’re not gonna have 100% Democratic senators.

Soooo---if you know it's so bad you wouldn't risk it when you're up for election, maybe you should not vote for it at all....ever.