In the name of global warming, 20,000 Ugandan villagers burned out of their homes

It's not enough that the environmental agenda has wasted billions on phony "green jobs"; or made millionaires out of the U.N.'s ethically challenged climate change panel; or helped cause the deaths of tens of millions with its senseless ban of DDT. No, not enough.

Now, tens of thousands of Ugandans have been burned out of their homes to help a company issue "carbon credits", the fraudulent currency of the climate scam.

According to the company’s proposal to join a United Nations clean-air program, the settlers living in this area left in a “peaceful” and “voluntary” manner...

...People here remember it quite differently... villagers described gun-toting soldiers and an 8-year-old child burning to death when his home was set ablaze by security officers... “They said if we hesitated they would shoot us,” said William Bakeshisha, adding that he hid in his coffee plantation, watching his house burn down. “Smoke and fire.” 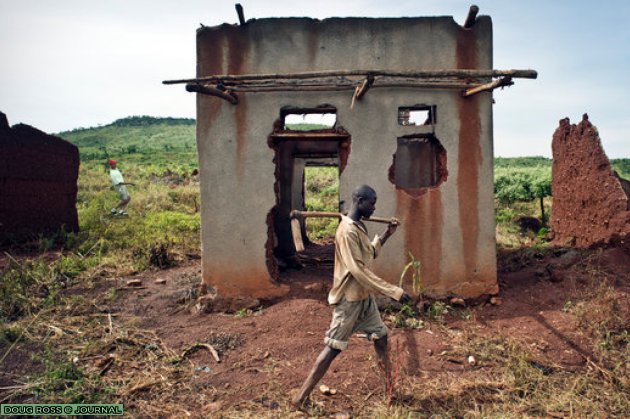 According to a report released by the aid group Oxfam on Wednesday, more than 20,000 people say they were evicted from their homes here in recent years to make way for a tree plantation run by a British forestry company, emblematic of a global scramble for arable land.

...Across Africa, some of the world’s poorest people have been thrown off land to make way for foreign investors... in this case, the government and the company said the settlers were illegal and evicted for a good cause: to protect the environment and help fight global warming.

The case twists around an emerging multibillion-dollar market trading carbon-credits under the Kyoto Protocol, which contains mechanisms for outsourcing environmental protection to developing nations.

The company involved, New Forests Company, grows forests in African countries with the purpose of selling credits from the carbon-dioxide its trees soak up to polluters abroad. Its investors include the World Bank, through its private investment arm, and the Hongkong and Shanghai Banking Corporation, HSBC.

Remember, though, it's all worth it because "this was the moment when the rise of the oceans began to slow...."