Apparently, America's job creators are under-taxed. At least that's the word from Uncle Ben, who relays this note from his Beltway corporate tax guru. 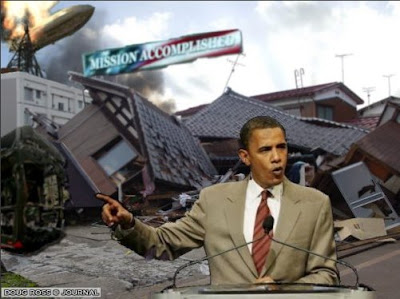 The White House today is proposing to pay for its new jobs bill entirely with tax increases.

It proposes these tax increases:

--Treat carried interest as ordinary income rather than as capital gains. Total: $18 billion;

White House Office of Management and BudgetDirector Jack Lew outlined President Barack Obama’s plan to pay for his $447 billion jobs plan... The new tax rules would not take effect until January 2013, Lew said. Obama is not offering any spending cuts to pay for the jobs plan.

A half-century experiment in draping steam­ship anchors around the necks of the productive class and expecting them to run a four-minute mile has ended in failure. The confiscation of rights and property, the moral impoverishment of generations caused by the state’s usurpation of parental obligations, the elevation of a credentialed elite that believes academia’s fashions are a worthy substitute for knowledge of history and human nature, and above all the faith in a weightless cipher whose oratorical panache now consists of looking from one teleprompter screen to the other with the enthusiasm of a man watching someone else’s kids play tennis–it’s over, whether you believe in it or not. It cannot be sustained without reducing everyone to penurious equality, crippling the power of the United States, and subsuming the economy to a no-growth future that rations energy.

The modern Democrat Party is simply a shell, a lifeless husk that was subsumed by the radical Left thanks to tens of millions of dollars from George Soros and other one-world Marxists.

If we don't vote the entire Democrat Party apparatus out of office -- at every level of government -- in 2012, America deserves its fate.

Dude, you're such a fucking MORON. How do you NOT kill yourself.

As we all know, the proposal is simply more of what hasn't worked, so we'll keep those millions on unemployment and under the commissar's thumb, thus elongating their time on the public teat and assuring the nanny state continues well into the 2012 election cycle. Perfect left-wing, Socialist politics.