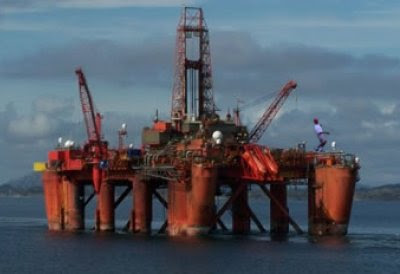 Deep-water drilling will resume in the Florida Strait when a giant, semi-submersible oil rig en route from Singapore arrives later this fall. The bad news is it will not be American.

While U.S. oil and energy prices "necessarily skyrocket," as President Obama once said they would under energy policies that have imposed a de facto ban on offshore drilling, a massive Chinese-built semi-submersible oil rig is on its way from Singapore to a drilling position off northwest Cuba... as little as 50 miles from Key West....

...Normally, what are called "economic zones" extend 200 miles off a country's coastline. In some cases, there are conflicts based on resources and geography. In 1977, President Carter signed a treaty with communist Cuba that essentially split the difference and created for Cuba an "exclusive economic zone" extending from the western tip of Cuba northward virtually to Key West. Cuba then divided its side of the Florida Strait into 59 parcels and put them up for lease.

The U.S. Geological Survey recently estimated the North Cuban Basin contains as much as 9 billion barrels of oil and 22 trillion cubic feet of natural gas. Other estimates range from 5 billion to 20 billion barrels of crude. Pools of oil and natural gas tend not to obey lines drawn on a map. It's certain that at least some of Cuba's wells will be tapping oil pools that straddle the boundary separating our zone from Cuba's, meaning Havana will be getting oil that should be ours.

But fret not, peons: our thrifty President is carefully investing taxpayer dollars in savvy energy investments like Solyndra.

And don't forget his neighborly support of $ billions to Brazil so they could drill offshore.

How typical - Americans already whining that Cuban ressources should 'actually' be theirs. Next we hear is that Cuba has weapons of mass destruction and is about to harm the USA - which, of course, makes a preemptive strike oh so necessary. As for treaties, the USA have broken every treaty they ever signed the minute they saw a profit in doing so.

I would be happy for the little island of Cuba to strike it rich under the USA's nose, but I fear all their find will bring them is war, bloodshed and plunder, a Caribbean Iraq. Truly, the USA are the pest of the world.