Just forward the lede on your latest brain secretion in the cover letter:

Just a few winters ago my wife and I took our daughters to witness the inauguration of a man who had campaigned on hope and embodied possibility. We are pretty immune to political euphoria, but, circulating among the footsore pilgrims, we could imagine our country had embraced the idea that we were all in this together. When the newly sworn-in president congratulated us all on choosing unity of purpose over recriminations and worn-out dogmas, we wanted to believe that we had done exactly that... 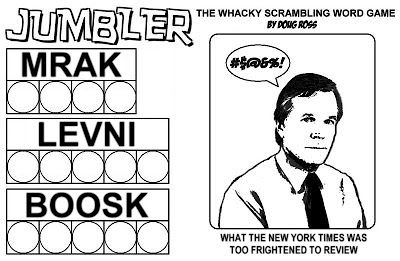 Wow. I think I just wrenched my clavicle.

How are these for 'Recriminations'?

I could continue, but I won't. There's plenty more here.

And how are these for 'Worn-Out Dogmas'?

• "I do think at a certain point you’ve made enough money."
• "I think when you spread the wealth around, it’s good for everybody."
• "Our individual salvation depends on our collective salvation."

• "And it's not surprising then that they get bitter, they cling to guns or religion or antipathy to people who aren't like them."
• "So we're going to provide a $4,000 tuition credit, every student, every year, but, students, you're going to have to give back something in return."
• "We can't drive our SUVs and eat as much as we want and keep our homes on 72 degrees at all times ... and then just expect that other countries are going to say OK."

Don't bother reading the rest of Keller's vomitus. The first paragraph is the Cliff's Notes version, a digest of evil and stupidity. Oblivious to history, economics, facts, logic and human experience, Keller and his progressive ilk are perfectly willing to lead America into hell.

And it's our job to stop these malevolent schmucks at the ballot box before it's too late.

This is why you make the big bucks, Doug Ross.