The Look on the Ref's Face #Priceless #Mayweather #Ortiz #Merchant

Controversy, outrage and chaos reigned during and after last night's Floyd Mayweather-Victor Ortiz fight with veteran commentator Larry Merchant telling the undefeated Mayweather that "I would kick your ass if I was 50 years younger".

The fight was stopped in the fourth after a controversial knockout of Ortiz.

Mayweather was in total control of the fight at the time of the stoppage... The controversy began when Ortiz enjoyed a rare flurry of success, backing Mayweather up against the ropes in the fourth round. However, he then struck Mayweather with a headbutt for which he was punished by referee Joe Cortez.

Ortiz attempted to apologize to Mayweather and hugged him near the center of the ring. However, Cortez had already called for time to be restarted. Mayweather let fly with a left hook that stunned Ortiz, then knocked him to the canvas with a straight hand... 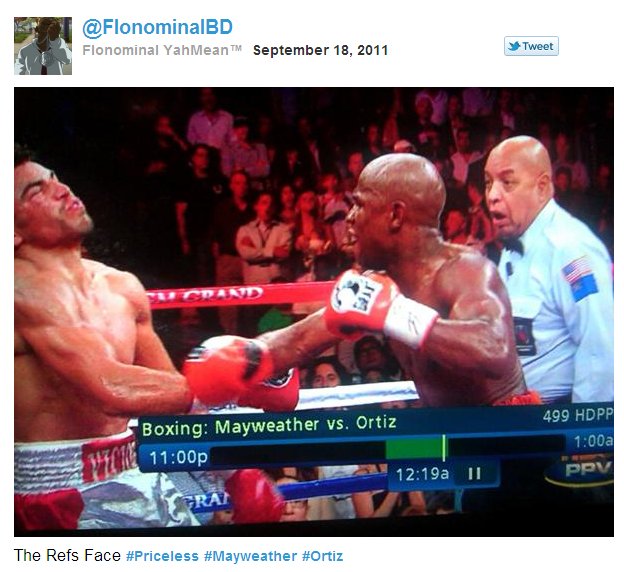 ...Merchant, the HBO Pay-Per-View commentator, challenged [Mayweather] over the fairness of his winning blows. Mayweather unloaded with both fists a split-second after the fighters had hugged following a headbutt for which his opponent was deducted a point, and Ortiz was unprotected and unaware when the strikes landed.

Merchant suggested that his tactics may have been either illegal or outside the spirit of the fight game, and then Mayweather vented his ire, referring to the 80-year-old broadcaster by an expletive and barking that he should be fired from his television position.

These kinds of antics and Mayweather's refusal to fight Manny Pacquiao -- the acknowledged pound-for-pound best boxer in the world -- have worn much of the luster from the champion's once-pristine image.

And if he continues to avoid Pacquiao, it's likely the history books will place a definitive asterisk on his undefeated record.

at 9:45 AM
Email ThisBlogThis!Share to TwitterShare to FacebookShare to Pinterest
Labels: Sports

Reminds me of that Korean boxer in the Olympics that stopped and got creamed.

I much prefer the UFC and MMA fighters !!!

My son, now in college, trained with Victor Ortiz at the La Colonia gym in Oxnard CA for 2 years. Victor was just getting started, and was the nicest guy in a gym full of nice guys. The headbutt was a surprise, the apology was not. Mayweather's hit may be legal, but it shows he's not champion material anymore.