Ben Bernanke issued a death sentence on the PBGC yesterday

If Fed Chairman Ben Bernanke was trying to accelerate the collapse of public and private pension systems, it looks like he succeeded yesterday.

The Federal Reserve's 'Operation Twist' to bring down bond yields and stimulate the economy is likely to cause pain for the nation's largest pension funds, already struggling with funding shortfalls from the recent stock market decline. 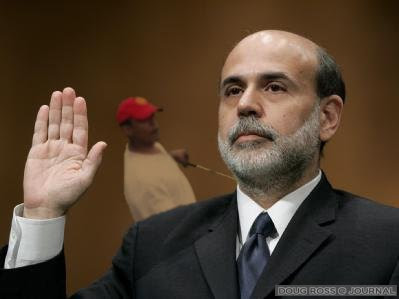 Hit both by falling stock prices and falling bond yields, the 100 largest pension plans of public U.S. companies have assets covering only 79 percent of their liabilities as of the end of August, down from 86 percent at the end of 2010, according to consulting firm Milliman Inc...

...[Twist] could drive down the yields on AA-rated corporate bonds and related benchmarks used by the pension funds to calculate their liabilities.

Most private U.S. defined benefit plans, which oversee about $2 trillion, are hurt when long-term yields decline because of the way the plans must value future payouts they will make to retirees in coming decades.

Let me be the first to predict that Ben Bernanke just signed the death sentence on the Pension Benefit Guaranty Corporation (PBGC). What's that you say? It's yet another masterpiece of central planning, which happens to be bankrupt. Just like Social Security, Medicare, the FDIC, the Federal Highway Trust Fund, and everything else the Statists touch.

All of this means that taxpayers -- your kids and grandkids included -- will be on the hook for yet another of the Obama Democrats' epic failures.