Politico, home of failed Washington Post reporters, offers a feature called "The Arena", which it touts as a daily debate among "policy-makers and opinion shapers".

On July 20, 2010 the topic of the day was "...will branding tea party 'racist' work?". Among dozens of respondents, Mary Frances Berry -- a famous liberal activist and former Clinton appointee -- accidentally blurted out the truth: 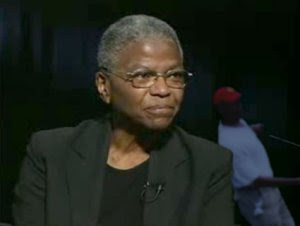 Tainting the tea party movement with the charge of racism is proving to be an effective strategy for Democrats.

There is no evidence that tea party adherents are any more racist than other Republicans, and indeed many other Americans. But getting them to spend their time purging their ranks and having candidates distance themselves should help Democrats win in November [2010]. Having one’s opponent rebut charges of racism is far better than discussing joblessness.

The tactic of tarring innocent people as racists is despicable, but not unexpected coming from the sewer-dwelling thought leaders of the hard left Democrat Party. In fact, the current administration has done more to promote racial divisiveness than any White House since the Wilson administration.

The Tea Party is interested in one color: the yellowed parchment of the United States Constitution. You know, Democrats: that antiquated document that you take an oath to uphold, lying all the while.


Hat tips: Daily Bail and I Hate the Media.

she is a truth-teller.

as head of the divil rights commission she held hearings to try and find stemnatic voting rights violations by thr gop abainnst gore.

she found prrof of... none.

i watched all the hearings.

she was as fair as a partisan can be.

I'm so sending this woman a Christmas card.

Yes, she's a liberal, but dude...she fricking nailed it. Gotta respect that.

November 2010 was a taste of the redress coming. November 2, 2012 is coming with a bone in its teeth. It will be a massacre of the left. It is going to be the winter of their discontent.

Yet, it's the TEA Party that's bad?