Solyndra Execs Delay Their Testimony (Shredder Sale at Office Depot!) While DOE Loan Chief Throws Everyone On His Staff Under the Bus

And did I mention that Solyndra received said loan even though everyone knew that said company was doomed from the start?

Jonathan Silver is "Executive Director of the Loans Programs Office for the Energy Department". He was called to testify before the House Energy and Commerce Committee today and, under intense questioning, he threw his staff under the bus. 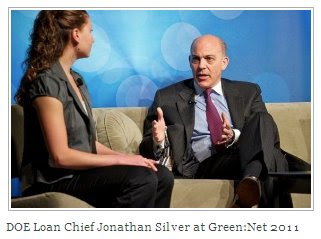 Silver said private investors who loaned $1.1 billion for the Fremont facility were also taken by surprise. He pinned blame for the bankruptcy on more than $20 billion in direct investment by the Chinese government in solar manufacturers who now dominate the industry...

...Republicans also charged that the administration broke the law under the Energy Policy Act, which prohibits the government from subordinating a taxpayer-backed loan to loans by private investors. The administration agreed last fall to restructure the loan and to put taxpayers in line behind an additional $75 million ponied up by private investors...

It turns out that Solyndra's corporate executives have, eh, delayed their testimony before Congress.

Emails obtained by ABC News prove that the White House knew Solyndra was a failed business before it rammed the loan through the approval process. But I'm sure that had absolutely nothing to do with the fact that Solyndra's backers were huge Obama campaign contributors.

There are more scandalous loans and loan guarantees out there.

Why did the US taxpayer backstop a $2 billion debt for an arm of the French government? That the Eagle Rock uranium enrichment plant in Idaho.

Their competitors had nearly finished their plant WITHOUT loan guarantees and another, American, company was denied a guarantee for unknown "technical" reasons.

It makes NO sense except as a handout to the French government with YOUR tax dollars. This saves the French many millions through lower interest rates.