But, hey: it's not like the U.S. is running trillion dollar deficits or anything.

A cargo train filled with biofuels crossed the border between the US and Canada 24 times between the 15th of June and the 28th of June 2010; not once did it unload its cargo, yet it still earned millions of dollars. CBC News of Canada was the first to pick up on this story on the 3rd of December 2012, and began their own investigation into the possible explanations behind this odd behaviour.

CN Rail, the operator of the train, stated their innocence in the matter as they had only “received shipping directions from the customer, which, under law, it has an obligation to meet. CN discharged its obligations with respect to those movements in strict compliance with its obligations as a common carrier, and was compensated accordingly.” Even so, they still managed to earn C$2.6 million in shipping fees. 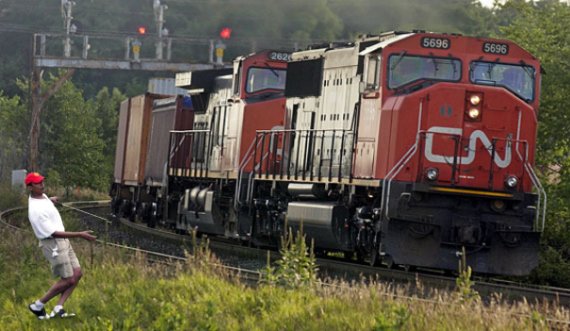 During their investigation CBC managed to obtain an internal email which stated that the cars of the train were all reconfigured between each trip but that the cargo was never actually unloaded, because “each move per car across the border is revenue generated”, the sale of the cargo itself was inconsequential.

The cargo of the train was owned by Bioversal Trading Inc., or its US partner Verdero, depending on what stage of the trip it was at. The companies “made several million dollars importing and exporting the fuel to exploit a loophole in a U.S. green energy program.” Each time the loaded train crossed the border the cargo earned its owner a certain amount of Renewable Identification Numbers (RINs), which were awarded by the US EPA to “promote and track production and importation of renewable fuels such as ethanol and biodiesel.” The RINs were supposed to be retired each time the shipment passed the border, but due to a glitch not all of them were. This enabled Bioversal to accumulate over 12 million RINs from the 24 trips, worth between 50 cents and $1 each, which they can then sell on to oil companies that haven’t met the EPA’s renewable fuel requirements...

When we get an adult in the White House, the first order of business should be to nuke the EPA's budget from orbit. It's the only way to be sure.

If Star Trek's Scotty were around, he'd probably say this about government regulations:

"The more they overthink the plumbing, the easier it is to stop up the drain."

Sometimes I think Government regulations are like software, but with a twist: When Politicians take advantage of a law, the advantage is labeled a "feature"...when anyone else does it, it's a "bug". ;-)

One of my old bosses once told me, "Just tell me the rules and i'll screw them with 'em."

Time has proven him correct. lol

America needs to start a dialog to determine at what level of stealing from the public constitutes a capital offense.

I think the EPA is great and should be allowed to do their job properly.I will reserve my scorn forthe corrupt actors that set up such easily abused rules for private gain. This is a direct consequence of our government being owned by corporate money.

Dude, you gotta get your separation of powers down straight. Presidents don't legislate.

@Anonymous: So who runs the EPA and makes all of these rules, genius? Uhm, that would be the Executive Branch, thanks.