Yes, really. Muslim Matters is a news hub for all things Islamic, with a special focus on Western countries. MM has a mere 425,000 "likes" on Facebook, which indicates it is quite mainstream.

This man @alzouman climbed Mt Everest to hold the book up on the highest point on Earth #HolyQuranBookOfTruth pic.twitter.com/XeAR546Ite 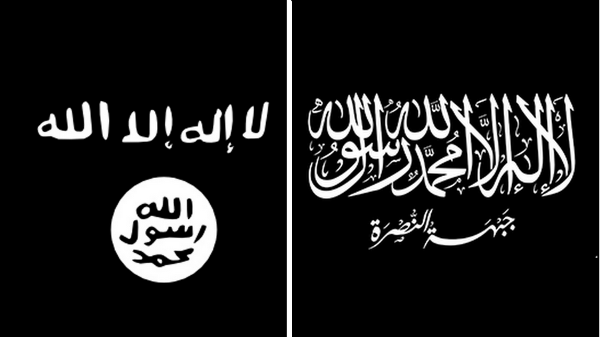 When even Al-Arabiya is reporting that ISIS has committed crimes against humanity, you may want to rethink the cheerleading, fellows. To wit, "Massacres, beheading boys as young as 15, and amputations and lashings in public squares that residents -- including children -- are forced to watch figure on the list of crimes, as does the widespread use of child soldiers, stoning women to death for suspected adultery and holding women as sexual slaves and forcing them to bear children for the fighters."

Or is ISIS now what passes for moderate, mainstream Islam?

There is no appeal in climbing Everest anymore. It is littered with garbage, frozen feces, dead bodies and empty oxygen tanks; really, no different than the future Muzzies hope to inherit.

Looking at the photo, I would doubt he is standing on Everest's peak.

Flag on left is ISIS. Flag on right is al Nusra. Neither is the flag Farouq Alzouman took to the top of Everest *3 years ago*. He carried the Saudi flag.

Color photo of Qur'an and flag on Everest
http://www.muslimlinkpaper.com/community-news/community-news/3781-first-muslim-to-raise-the-quran-and-call-athan-from-everest-to-tell-story-of-perseverance-at-dus-banquet.html

Alzouman received an award for his endeavor this year, likely bringing all this up in a skewed fashion.

Someone is playing games with you.

Beheading boys as young as 15? If the photos I've seen have been accurately attributed, ISIS scum have beheaded girls as young as six. If true, clean deaths via bullets or bombs is too good for them. Something more dramatic, like reenacting what happened to the crew of the USS Indianapolis (except with NO survivors), seems appropriate.