ALLEN WEST: In Lame-Duck Session, Nancy Boehner Surrenders All Leverage Over a Rogue Administration Through 2015

By Allen B. West

Well, the “cromnibus” monster spending bill passed last night, and President Obama and Vice President Biden worked hard to get Democrat support — which they did not receive. 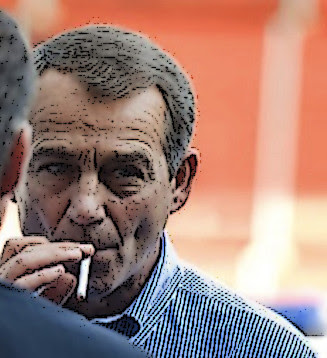 The funding measure passed and in doing so, the new incoming GOP majority will have little to no say in funding measures through the entire year — basically half of the new GOP majority Congress. A better approach would have been to execute a continuing resolution (CR) that went into February and then do appropriations by agency, funding what is essential by priority. Instead Obamacare is funded through October next year and funding to President Obama’s illegal immigration executive action — $2.5 billion. However, Speaker Boehner has declared that next February Congress will take up the illegal immigration fight, since the DHS is only funded through February. Whoopee.

In effect Speaker Boehner essentially surrendered the majority which the American people gave the House GOP and with it, the greatest leverage — the power of the purse. Some 1,800 pages, no doubt including pork, has passed which most did not read.

And what if the gambit Speaker Boehner has doesn’t work out next February? That’s the question The Hill asks, writing, “Even if Republicans shut down the Department of Homeland Security (DHS) next year, President Obama could still carry out his executive actions giving legal status to up to 5 million undocumented immigrants. Speaker John Boehner (R-Ohio) and other GOP leaders have punted the funding fight over Obama’s immigration action to February, arguing their new majority will have more leverage to stop the plan dead in its tracks.”

“But it’s unclear how much weight the threat of withholding funding would carry. Eighty-five percent of DHS employees continued to work during last year’s 16-day shutdown because they were funded with mandatory funds or deemed “essential” to national security or public safety, according to figures the Congressional Research Service (CRS) tracked down for GOP lawmakers. Only 15 percent of DHS employees were furloughed in last year’s shutdown, the CRS found. On top of that, some 90 percent of the department’s U.S. Citizenship and Immigration Services (USCIS), the agency key to implementing Obama’s executive action, continued operating.”

“Some rank-and-file Republicans are worried that Obama could declare all DHS workers “essential” and keep them on the job — then simply pay them once a funding deal is reached. “People will vote for [the funding package] and feel that they may have some real advantage in February, but it may not happen that way,” one House Republican who has studied the CRS figures told The Hill.”

So it seems funding DHS only to next February with the “promise” to take on President Obama’s executive action appears to be a ruse. And if that ends up being the case, then the GOP has completely lost any leverage for an entire year — a critical year because we all know nothing will be done in 2016, a presidential election year.

Once again, the game of politics has defeated sound fiscal policy, and who knows what dirty little secrets are hidden in those nearly 1,800 pages — which was just dropped Tuesday and voted upon Thursday evening. Does anyone believe every single Member of the US House of Representatives read that spending measure? If you do, well, there is some prime farmland just west of me here in Palm Beach Gardens.

But why? Why in a lame duck session would Speaker Boehner sacrifice the best leverage point the GOP majority in the House would have? Why would he surrender the electoral mandate he was given, which included the power of the purse? Whose side is he really on? That question must be answered.

Obummer has pics of Boehner with a little boy!

no conservative will ever again vote for a republican of the establishment. they have blown their best chance to restore the country to a rule of law.